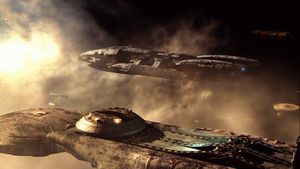 The passage is a immensely large star cluster that almost surrounds an aged star and its world, later known as the algae planet.

Flying through the star cluster is the shortest route to the planet, which the Fleet must journey to quickly to harvest needed foodstuffs after their food stores become contaminated, leaving the survivors of the Twelve Colonies close to starvation.

Lieutenant Sharon Agathon, whose body withstands greatly extended exposure to the intense radiation due to her humanoid Cylon physiology, completes a reconnaissance mission back and forth through the cluster and reports to Galactica's command staff.

The star cluster is too large for any Colonial ship to cross in a single jump, nor is there sufficient time to circumnavigate it.

The intense radiation inside the cluster is deadly to humans if exposed for longer than a few minutes. The blinding light of the cluster makes it very difficult, if not impossible, to navigate visually. Instrument navigation using DRADIS is also impossible. The cluster generates immense levels of heat as well that blister and damage ship hulls. The civilian ships electronics will be damaged if used in the cluster for very long; any civilians on these ships would also absorb fatal radiation levels quickly in the relatively unshielded ships.

Only battlestar Galactica and its Raptor fleet are sufficiently radiation-hardened for its navigation systems to correctly jump out of the star cluster once inside. The civilian passengers from each ship are transported within Galactica's thick hull to protect them from the radiation as they and their ships are shuttled over a series of flights. Skeleton crews on each civilian ship, using anti-radiation medication, are guided through the passage by Raptors and await jump coordinates from their Raptor pilot ship to escape. Five round trips, or "outbounds," are needed to move every civilian ship and their passengers through the cluster.

Despite the efforts of the Raptor pilots, some civilian ships are lost. Lost ships identified include

The Faru Sadin is nearly lost in the cluster as well but for the heroic actions of Captain Louanne Katraine (The Passage).