Ruins of the Opera House on Kobol.

The Opera House is an ancient structure in the City of the Gods on Kobol, along with other edifices such as the Forum and Temple. By the time of the arrival of the Colonials, the building has been reduced to a few scattered ruins. As a sketch of this area of the city is included in the Sacred Scrolls, the building may have had religious significance. 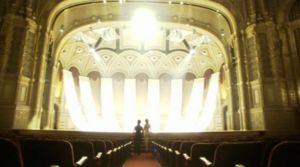 These are the ruins on Kobol near the crash site of Raptor 1, which is forced to land on the planet after being damaged by a Cylon Raider as it jumps into Kobol's orbit. Among the surviving passengers are Crashdown, Galen Tyrol, Tarn, Seelix, Cally, Socinus, and Gaius Baltar.

Shortly after the Raptor crash on Kobol, the virtual Number Six in a white dress leads Baltar towards the ruins of the Opera House, where viewers and Baltar see the Opera House as it was, millennia ago. It is in that virtual Opera House that Six shows Baltar an image of what she claims is their future child (TRS: "Kobol's Last Gleaming, Part II").

Much later a Number Three would have similar visions of the Opera House and the Final Five on the stage within. The Five appear as robed figures to her between death and resurrection, but she cannot clearly remember their faces until she steps onto the centerpiece in the Temple of Five and has the vision for the final time (TRS: "Rapture").

The Opera House is also seen in a dream or vision by President Laura Roslin, induced by taking of chamalla. In the vision, Hera Agathon is scampering through the halls, pursued by both Roslin and her mother, Sharon Agathon. But before either can reach her, Hera is picked up by a Number Six wearing a white dress, ending the dream (TRS: "Crossroads, Part I").

Just before the Fleet reaches the Ionian nebula, Roslin visits the Opera House again while undergoing her Doloxan treatment (but still using chamalla as well) in sickbay. She and Sharon are still chasing Hera through the lobby. This time, however, when the Number Six picks the child up, she takes her through a set of doors. Roslin wakes up with to find that Sharon and Hera shared the vision, all three having awakened screaming simultaneously. Agathon and Roslin visit the captive Caprica-Six, who confirms that she, too, had shared the dream.

At the Ionian nebula, Caprica-Six has yet another vision in the Opera House, where she, Gaius Baltar, and baby Hera stand on the stage and see the robed Final Five standing on the balcony above them (TRS: "Crossroads, Part II").

It is prophesied by the rebel's Hybrid that the "dying leader shall know the truth of the Opera House" (TRS: "Faith").

Later, Sharon Agathon runs after Hera through Galactica's hallways, where Hera runs into a Six known as Natalie, thus mirroring what she saw in her visions of the Opera House. Fearing that Natalie will take away her daughter, like the Six in the dreams, Agathon shoots the other Cylon (TRS: "Guess What's Coming to Dinner?").

During the Battle of The Colony, as Cylon Centurions board Galactica, the vision is paralleled in actual events. Hera runs away from her parents when Karl Agathon is shot in the leg, and Sharon Agathon abandons him to go after her. At the same time, Roslin leaves her post at the sickbay when she begins to have the Opera House dream again. Eventually, just as the vision showed, Caprica-Six and Baltar find Hera and take her into what they perceive as the Opera House, which is, in actuality, Galactica's CIC. The Final Five cylons stand above them on one of the higher levels, looking down upon Baltar and Caprica Six, just as the vision foretold. (TRS: "Daybreak, Part II")