"Number Six" is a stunning blonde who plays several key roles in the Cylon military. She is the first Cylon agent that viewers witness in the reimagined Battlestar Galactica saga. 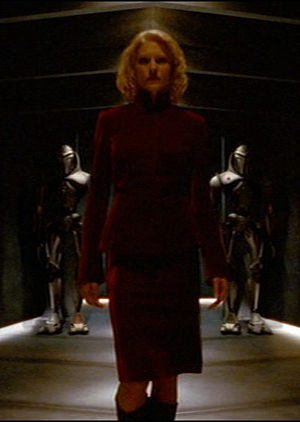 Number Six is a portent of doom for the peoples of the Twelve Colonies; she arrives on Armistice Station shortly before it is destroyed in what are the opening shots of the Cylon attack in the Miniseries. Dressed in a long-sleeved red tunic and matching knee-length skirt, she is the first and last "diplomat" ever sent to the station by the Cylons since its construction. She greets the Colonial officer present with the question "Are you alive?" When he answers that he is alive, she tells him to prove it - by kissing her. After he realizes that Armistice is under attack, she smiles and forces another kiss on him shortly before they are both destroyed.

Later, three Sixes in the same outfit are among the group of Cylons that rescue and debrief Aaron Doral, following his stranding on Ragnar Anchorage by the suspicious Colonials. One of them responds to a comment of the Eight in the group with "By Your Command," a trademark Cylon phrase in the Original Series.

For more, see the article, "Caprica-Six."

The copy of Number Six that seduced Dr. Gaius Baltar into unwittingly betraying the Twelve Colonies by giving her access to the Colonial defense mainframe.

Fleeing Caprica City and then the planet itself, Baltar is shocked to discover that the woman he had a relationship with on Caprica lives on - inside his head. 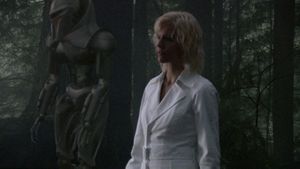 At least 3 additional variants of Six have been operational on Caprica, and appear to lead Cylon Centurion squads and have a subservient role to the "overseer" Six variants. This variant of Six is distinguished by the white raincoat it wears.

One of these variants distracted Helo, enabling him to be captured. In this, she shared the same seductive characteristic as shown by her "sisters" at Armistice station and with Baltar - her first act on "freeing" the captured Agathon is to ask "Are you alive?" and kiss him. (33) She was subsequently shot by Valerii.

The second acted as an observer to Helo's "escape", and this same variant may have been leading the Centurion troops into the Caprican farm Helo was hiding in (The Hand of God).

The third was present at Delphi, taking orders from an "overseer" Six (Colonial Day). 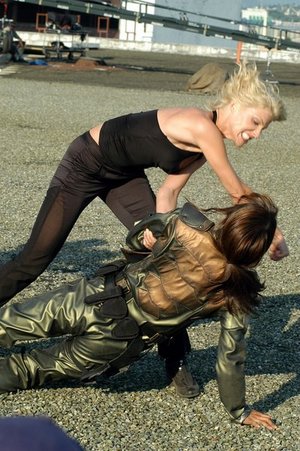 On Caprica, Six performs the role of a Cylon overseer, working with Aaron Doral to ensure their experiment involving the stranded Karl Agathon and Sharon Agathon either reaches its desired conclusion, or is suitably terminated (Bastille Day, Act of Contrition, Litmus, Flesh and Bone, Tigh Me Up, Tigh Me Down). These copies of Number Six wear a militaristic black outfit, with a black body-suit underneath suited to martial arts.

Following the destruction of a "troop leader" Six (shot by Sharon Agathon, in order to enable her to "rescue" Karl Agathon), her "sister" on Caprica demonstrates a certain vindictiveness towards Sharon Agathon when giving her a beating that goes far beyond the needs of the experiment (Litmus), thus revealing she may well be experiencing resentment for being shot (remembering that experiences and knowledge are passed from body to body among the various types of Cylon agents), as well as jealousy at Sharon Agathon's chosen role in the proceedings.

A further "overseer" Six is present at the Cylon's established base at Delphi, and is briefly seen by Helo when he attempts to gain access to the base in order to steal a ship and get off the planet (Colonial Day).

Perhaps this same overseer-Six surprised Starbuck in the Delphi Museum when she returned to Caprica to retrieve the Arrow of Apollo. They engaged in an all-out brawl, and just as Six appeared to be winning Starbuck rushed her, knocking both of them off of a ledge. This Number Six fell underneath Starbuck, breaking Kara's fall, and was impaled on building debris, killing her (Kobol's Last Gleaming, Part II).

Another "overseer" Six was present at the "farm" where Starbuck was taken after she was incapacitated by the Cylons. While the Cylon doctor Simon operated on her, Six was there to relay orders and see that everything was proceeding smoothly. She was definitely the controlling figure of the operation. This copy was later bashed over the head with a fire extinguisher by Kara Thrace as she made her escape (The Farm).

Yet another overseer, or possibly one of the previously witnessed copies, viewed D'anna Biers' broadcast in a theatre on Cylon-occupied Caprica in the episode "Final Cut". She remarked that the resilience displayed by the Colonials was impressive, and seemed overjoyed that Sharon's hybrid baby survived.

A copy of Number Six that physically appears on board Galactica to try to discredit Baltar as a traitor, using evidence which was flawed, so that he ended up being more popular than before. For more, see the article, "Shelly Godfrey."

For more, see the article, "Gina."

A copy of Number Six captured aboard the battlestar Pegasus and repeatedly tortured and sexually abused by the crew, before escaping with Baltar's help.

A Number Six in a gold tunic is one of four 'rebirth nurses' who greets the reincarnated Caprica-Six (this takes place shortly after the Cylon Attack has run its course), and it is likely this same group who nurse Boomer as she returns to life several months later. The Six in the group welcomes Boomer home and refers to her as "little sister".

Several other copies of Six were seen on Caprica in a variety of different outfits, which could indicate different functions or simply fashion choices.

A Six at the NCP Graduation Ceremony.

Various copies of Number Six form part of the Cylon occupation force that arrives on New Caprica one year after the Colonials settle in there. Throughout their 4 months stay there, they fall victim to various different attacks from the resistance movement.

When the resistance begins using suicide bombers, the Cylons decide to employ stronger measures against the human population. A vote is taken by six of the seven Cylon models on Colonial One, and while Caprica Six disagrees with this, two other copies overule her. This implies that Caprica Six no longer has the same amount of power she used to have, not even with those of her own model. (Precipice)