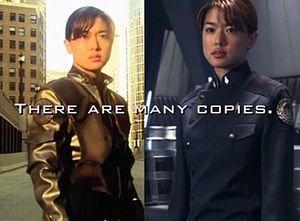 The Many Sides of "Sharon Valerii" (credit: Sky One / Sci-Fi Channel)

Sharon Valerii appears to be a woman in her mid-twenties of apparently Asian extraction. She is initially encountered aboard the Battlestar Galactica, where she is integrated into Colonial military life, serving as a Raptor pilot with the rank of Lieutenant (junior grade). Other variants of the Valerii model are active on Cylon-occupied Caprica

"Boomer" Valerii appears to be a young pilot recently-assigned to shipboard operations. Assigned to flying the Raptor reconnaissance vehicle. Her inexperience is demonstrated through repeated heavy landings aboard the Galactica (Mini-Series).

As a pilot, she is assigned alongside ECO Karl "Helo" Agathon, with whom she has developed a close friendship. She has also formed friendships with other pilot officers aboard the battlestar, sharing off-duty activities, such as regular card games (Mini-Series, Act of Contrition), all of which have helped her integrate into shipboard life and be accepted as a member of the crew.

Initially, "Boomer" Valerii is unaware of her Cylon status. As far as she is aware, she was born on the mining colony of Troy, the daughter of a family from Arilon (Flesh and Bone). Troy itself was destroyed in an unexplained cataclysm, allowing Boomer's background to be established as that of an orphan.

Following he arrival on-board the Galactica, she enters into a relationship with the ship's Chief Petty Officer Galen Tyrol. Whether this is unintentional, or a subconcious reaction to her Cylon programming / personality is unclear.

At the time of the Cylon attack, Boomer was flying her Raptor to Caprica with the Galactica's last remaining operational Viper squadron to Caprica when they attempt to engage Cylon Raider fighters. However, the Viper squadron is destroyed, and the Raptor is damaged while trying to escape, forcing Boomer and Helo to make an emergency landing on Caprica.

With the Raptor repaired, they undertake an unexpected rescue operation, lifting a number of children and adults from the planet. However, this is at the expense of Helo, who gives up his place aboard the Raptor so that Doctor Gaius Baltar can be rescued (Mini-Series.

Following this, Boomer works hard within the fleet, initially assisting Laura Roslin's attempts to gather together as many surviving civilian ships within the colonies as possible, finding a number of ships critical to the fledgling fleet's survival (such as a fuel tanker) (Mini-Series); she has also been engaged in other critical acts that have aided the continued survival of the fleet, such as the discovery of a tylium-rich asteroid, replete with an active Cylon mine (The Hand of God). It is her Raptor which also locates a source of water to replenish the fleet (Water).

However, at the same time as she is apparenlt working in support of the fleet, Boomer's underlying Cylon programming emerges. She is engaged in the sabotage of the Galactica's water tanks which results in the initial water shortage (Water); later she may have assisted the suicide bomber incarnation of Aaron Doral gain access to a munitions store aboard the Galactica and construct a bomb which very nearly kills Commander Adama and Colonel Tigh.

Having "awoken" shortly after the bombs used to destroy the Galactica's water tanks had been planted to find herself soaking wet (Water), Boomer's human personality becomes increasingly concerned that she is not all she appears. This worry is increased when she experiences a degree of "attraction" to a captured Cylon Raider, and is able to give insight into how it can be properly assessed and understood (Six Degrees of Separation, Flesh and Bone). Her concerns are further elevated when, following the bombing by Doral, the Galactica's Master-at-Arms, Sergeant Hadrian suspects her and Tyrol of Cylon complicity (Litmus).

Isolated from Tyrol following this event, when he ends their relationship following the arrest of Specialist Socinus (Litmus) and facing Tyrol's own suspicions concerning her activities immediately before the bombing, Boomer finds herself emotionally isolated and stressed. Despite assurances from Doctor Baltar that she is not a Cylon (Flesh and Bone), Boomer finds short solace in his test rests, and also facing an accusation from another source when she finds the word "CYLON" written on the mirror of her locker (Six Degrees of Separation).

Confused and isolated, Boomer withdraws into herself, and attempts to take her own life, but finds herself initially unable to do so. During her second attempt, she is interrupted by Dcotor Baltar who, rather than discouraging her, essentially gives her his blessing on her attempt. Folloeing his departure from the bunkroom, Boomer does shoot herself. However, her Cylon personality apparently interrupts the attempt, and Boomer can only severely wound herself in the face (Kobol's Last Gleaming, Part I).

Following this, and with the Galactica having dispatched a Cylon basestar in orbit above Kobol, Boomer is subsumed by her Cylon personality and visits CIC, shooting William Adama and seriously wounding him (Kobol's Last Gleaming, Part II).

When Helo is left on Caprica, the Cylons use him in an elaborate experiment. Key to this experiment is another variant of Valerii, with variants of Doral and Six acting as overseers for the experiment. She is initially encountered "rescuing" Helo from capture by Six. Following this, she leads Helo to "her" Raptor, now in the hands of Cylons, thus convincing him that they have no direct way off of the planet (Water).

Following this, and having recived a "Colonial signal" on the radio receiver they are carrying, she leads Helo to a city where they find a fully-equipped "fallout shelter" in which two people can live in reasonable security, hidden from above-ground Cylon operations, and with sufficient supplies to last a considerable period of time (Act of Contrition).

The purpose in establishing this "nest" appears to be to elicit an emotional response in Helo towards Valerii. When this fails, and he continues to express a desire to get off the planet, the Cylons arrange for Valerii to be "captured", determining that if Helo does not seek to rescue her, the experiment has failed, and he must be killed (You Can't Go Home Again).

Following Helo's "rescue" of Valerii, genuine concern and mutual need result in them making love (Six Degrees of Separation), which she reports to Doral and Six. A new hideout, a cain in the woods, is being constructed for Helo and Valerii, and she is instructed to lead him there and have him stay with her there - or kill him if he attempts to leave (Flesh and Bone).

Faced with this, and the realisation that she has herself fallen in love with Helo, Valerii disobeys her instructions and attempts to lead Helo to Delphi, where they hope to steal a vehicle and get off the planet (Secrets and Lies). On route to the spaceport, Valerii shows signs of being pregnant: she is sick (The Hand of God) and develops a ravening appetite (Colonial Day).

On reaching Delphi, she and Helo attempt to break into the Cylon facilities and reach the spaceport, but when Helo encounters another variant of Valerii, he draws the conclusion that she is a human clone created by the Cylons, and goes on the run - alone (Colonial Day). When Valerii catches up with him, her emotional condition is so confused, she challenges him to shoot her (Kobol's Last Gleaming, Part I). However, Helo is only able to wound her, then he takes her with him in the hope she can help him get off of Caprica.