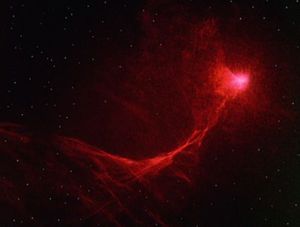 The Nova of Madagon lies in between the path taken by the Fleet during their exodus from Twelve Colonies of Man and the planet Carillon. As Carillon was a "nine centon"[1] journey via a more circuitous route, Captain Apollo convinces the newly-reformed Council of Twelve that the only way to avoid the Cylon trap at Borallus was to cut through the Nova of Madagon, destroying the minefield that the Cylons had laid using Vipers and laser torpedoes (Exodus!).

The cockpits were fully covered to prevent the blindness of the three pilots—Apollo, Boomer, and Starbuck—while they cleared a 100 maxim wide path through the minefield to Carillon. The starfield's energies were such that the Vipers' scanners failed, and thus had to be guided by Galactica's sensor suite (Deathtrap!).