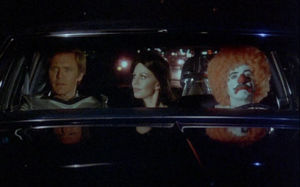 Norman and his wife Shirley are driving to a Halloween party where Wolfman Jack is in attendance. Norman is dressed as a clown, although he is far from jovial.

Upon the revelation by Shirley that Norman is the general manager of a radio station, of which Wolfman Jack is an on-air personality, Andromus believes the Wolfman can take them to radio equipment for them to communicate with the distant Cylon Empire (The Night the Cylons Landed, Part I).