Difference between revisions of "Navigation in the Re-imagined Series"

In the Re-imagined Series, the principles of spaceflight are taken seriously, in that all ships have a logical a process to move in all three axes of movement, and travel at reasonable speeds with methods that don't necessarily duplicate the fantasy flight principles seen in space fantasy, such as Star Wars.

In addition to their sublight engines used for interplanetary travel within a solar system, all ships have a centralized way to move the ship to port or starboard, and to yaw and rotate the ship. This requires the use of an RCS, a reaction control system[1].

The reaction control system is designed to provide a spacecraft with guidance and steering. It has two main functions:

All Colonial vessels utilize RCS for maneuvering and station keeping, although the scale of the systems varies widely.

Like many other technologies, Cylon attitude control for small craft like Raiders is similar or even identical to the Colonials (TRS: "Scar").

Basestars don't appear to have any RCS features. This may be an inherent design, as its Raiders and missile systems can be deployed in a 360-degree arc--that is, the basestar can deploy its offensive elements from any direction of the ship.

While basestars have no visible RCS, orientation can be achieved through other means. For examples, reaction wheels use a spinning mass on a spacecraft axis to control attitude. By spinning the reaction wheel in one direction, torque is generated and the spacecraft will rotate in the opposite direction, in accordance with Newton's laws of motion. This system is used on real space platforms, such as the Hubble Space Telescope. However, such systems generate relatively small amounts of torque and they tend to be used in situations where precise orientation takes priority over the need to change orientation rapidly.

Basestars however, have a sublight propulsion system in addition to FTL drives. Basestars can be seen approaching the algae planet in the episode "The Eye of Jupiter". This capability can also be inferred from episodes like "The Captain's Hand" where a basestar is said to be retreating. Its nature however is unknown, as like with the RCS system, no engines are visible on the vessels.

Distances and speeds in the Miniseries

To reach this number, clues are taken from Billy Keikeya, on Colonial Heavy 798, enroute to the battlestar for its decommissioning ceremony. Keikeya tells Laura Roslin that he had sent a copy of her ceremony speech to President Adar for review, but warns that there is a time delay of 30 minutes between Galactica and Adar's actual location, which is confirmed as Caprica City, the seat of the Colonial Government [2].

The speed of light (and of wireless transmissions) in vacuum is 186,282 miles per second. If President Adar sent a wireless message from Caprica to Galactica in an attempt to correct Roslin's speech, how long would it take the message to get there? Keikeya gives this answer: 30 minutes. This makes it possible to determine the distance using the equation: s = vt (or, distance = speed x time)

Simplified, the wireless message travels over 335.5 million miles in 30 minutes to Galactica. This is approximately 3.5 astronomical units, or 3.5 times the distance between Earth and our sun.

Right after Billy Keikeya's conversation with Laura Roslin on her speech, the captain of Colonial Heavy 798 speaks on the public address intercom of the starliner, telling the passengers how long their trip to Galactica will take: 5.5 hours. Assuming that the starliner has just left the neighboring space of Caprica and has reached its cruising speed, and given that we know Galactica's distance from Caprica, we can determine Colonial Heavy 798's cruising speed with the same formula as above, now adjusted to calculate speed:

While Colonial Heavy 798 is moving very fast across space at 61,000,000 miles per hour on its sublight engines, this is only approximately 9 percent of the speed of light, so passenger liners do well in getting from place to place, or colony to colony. To give a real-world comparison, Colonial Heavy 798 could fly from our sun to Earth in about 90 minutes. The light from the sun takes only 8 minutes to arrive on the Earth's surface.

Given the velocities involved, extremely high accelerations must be used to attain them in reasonable (usable) time frames involved for in-system transportation. Such G forces would kill any humans involved unless some means of dampening them were employed. Given that the technology to perform "space-folding"[3] FTL jumps is also available, the technology to manipulate gravity would lie in the same area.

Alternate calculations for distances and speeds in the Miniseries

This is an alternative to the above which assumes a thirty light minute distance. A time lag[4] or delay or latency, in the case of a communication signal occurs both ways. A thirty minute time lag in communication implies that the signal would take fifteen minutes to travel between the two creating a total lag of thirty minutes. In short: It takes thirty minutes for person one to send a message and get a reply back. This would alter the calculations made to the following.

-This makes the same assumptions as to the route of Colonial Heavy 798 as the initial proposal.

Based on deduction from information gleaned in "Scattered", a set of jump coordinates could either be given in cartesian or spherical coordinates to specify a point in three-dimensional space.

A possible algorithm for jump calculations would therefore necessitate first and foremost the determination of the exact location of the ship, relative to its intended point of arrival after the jump. This is done by identifying, fixing and triangulating several stars [5]. Next, the ship's position relative to the intended point of arrival would be plotted on a three-dimensional coordinate system, using the ship as its point of origin, i.e. (0/0/0).

Then, the positions of any known stellar bodies and other obstacles would have to be plotted on that coordinate system as well, in order to establish where to jump and where not to jump.

Finally, the point of arrival would likewise be plotted. The hard part in making a single jump over long distances, like to Ragnar in the Miniseries, would therefore lie not so much in getting the jump drive to manipulate space properly, as in correctly figuring out where possible obstacles, such as stars, black hole or planetary bodies are located and then adjusting the direction of the jump accordingly, so as to land the ship in a clear volume of space.

Galactica has an astrometrics lab with optical and x-ray telescopes, that is used to acquire fixes on surrounding stars, which are then used in FTL jump calculations.

In "Home, Part II", the Lagoon Nebula appears in a holographic map in the constellation of Scorpio[6] in the Tomb of Athena.

Galactica's location and the rough location of the Twelve Colonies of Kobol can be deduced with simple logic:

The nebula is shown from the same vantage point as it would appear to an observer on Earth, yet the characters are able to recognize it. This suggests that the Colonies are on a line of sight "behind" Earth's solar system. Otherwise, the nebula would appear in a different shape and size as it is not a symmetrical object.

Most other celestial phenomena in the series are apparently fictional as the events of the series occur 150,000 years ago. Apart from the Lagoon Nebula (M8), the other real-life nebula shown is the Great Orion Nebula (M42) which is briefly seen in the opening scene of "Scattered". Both M8 and M42 are large stellar "nurseries" that have existed for millions of years. M42 is 1,350 light years from Earth in the same general direction as Kobol and the Colonies. It is by far the brightest star forming region visible from Earth. The Colonies are located on the other side, hence the vantage point is totally different and the nebula would not be as easily recognizable as the Lagoon Nebula. The Orion Nebula undoubtedly harbors pulsars and dense young star clusters such as the Passage. However, nebulae ejected by supernova remnants dissipate after ten thousand to a hundred thousand years [1] which means the Ionian Nebula, Lion's Head Nebula and Eye of Jupiter cannot correspond to any real-life supernova remnant/planetary nebula visible today. 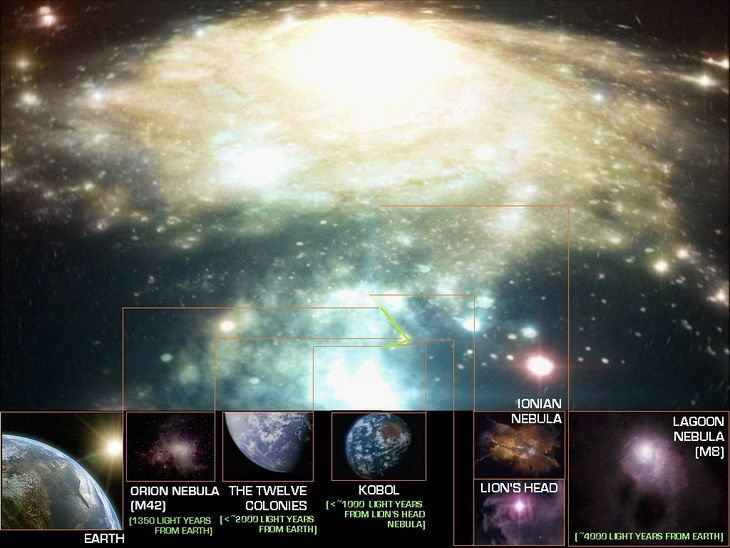 Image of Milky Way galaxy from Crossroads, Part II with the approximate relative positions and distances of the Colonies, Earth, Lagoon/M8 and Orion/M42 Nebulae indicated. The positions of Kobol, Lion's Head Nebula/algae planet are conjectural but they are likely located near M42. Earth is located in the general dirction of the Ionian nebula as seen from the algae planet. The thick green line indicates the approximate route from Earth to the Colonies via the Orion Nebula and Kobol/algae planet.

What happened in "Scattered"? 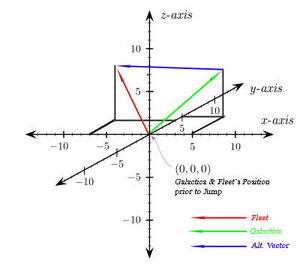 In "Scattered", Galactica and the Fleet execute FTL jumps according to different sets of coordinates. As a consequence, Galactica has to jump back along its original jump vector, to the former point of origin of the two jumps, re-acquire new starfixes and calculate the Fleet's current position.

At first glance, this seems counter-intuitive. Since presumably both sets of jump coordinates are known to Galactica, a simple triangulation of the two jump vectors would produce an alternative third set of jump-coordinates which would allow Galactica to jump to the Fleet directly. A possible explanation is as follows:

The emergency jump coordinates given to the civilian fleet aren't just an older set of correct coordinates. According to Colonel Tigh, in a conversation with his wife, jump calculations need to be regularly updated to compensate for stellar drift and the movement of the ships themselves. Lieutenant Gaeta was supposed to send the updated jump plots to the other ships but forgot to. [5] As a result, the Fleet jumped with a set of coordinates that didn't fit the local space-time conditions. The concept of a blind jump is introduced in the episode "Pegasus". While jumping with a wrong sets of coordinates probably isn't as risky as jumping with no calculations at all, the destination would still be unpredictable.

Galactica has the coordinates that the civilian ships used to make their jumps, but not their actual position. However, in a process that is largely unexplained, Galactica is then able to calculate their real location from the Fleet's emergency jump coordinates, as well as the newly acquired starfixes. This unusual procedure can also explain the abnormally long duration (several hours) of the calculations on the initially un-networked computers, compared to the relatively short amount of time jump calculations usually take.