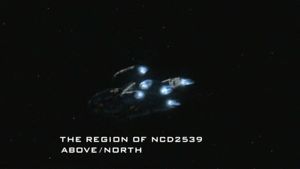 Galactica in the region of NCD2539 (TRS: "A Measure of Salvation")

NCD2539 is an object in space near a Cylon supply route which is known to the Colonials.

Galactica intentionally visits this area to lure Cylon forces, including a Resurrection Ship, into to it. The Colonials intend to kill their humanoid Cylon prisoners, whose consciousnesses would download and infect the Cylon populace with a human virus with a bioelectric pathogen that would effectively annihilate the Cylon race. The objectives of the Battle of NCD2539 are thwarted by internal sabotage (TRS: "A Measure of Salvation").

The complete designation of the battle's location is "The Region of NCD2539 - Above/North."