Difference between revisions of "Margaret Edmondson"

Lt. Margaret "Racetrack" Edmonson is a female ECO aboard battlestar Galactica who accompanies LT (j.g.) Sharon "Boomer" Valerii on a mission to destroy a Cylon basestar. She witnesses Boomer's attempted assassination of William Adama in Galactica's CIC (Kobol's Last Gleaming, Part II). Immediately after, she informs the CIC staff that Boomer returned from placing the nuclear warhead inside the basestar orbiting Kobol without her helmet on, and that she probably gave away Galactica's position to the Cylons ("Scattered").

Racetrack pilots the Raptor carrying Lee Adama's SAR mission to Kobol, encountering fire from Cylon anti-aircraft missiles. Galen Tyrol fells the missiles' DRADIS dish on the surface, and they fail to lock on. Racetrack's Raptor then destroys the Centurians on the ground with a volley of missles, and recovers the trapped Galactica crewmen. ("Fragged")

Racetrack aids the escape of President Laura Roslin from the brig by falsely claiming that her Raptor was having technical problems, enabling the furloughed Lee Adama to report to the hangar bay instead of the brig per his arrest. She then helps prep the Raptor used as the escape craft for launch, but remains on Galactica (Resistance). On Boomer's death, Edmonson becomes the only person in the Fleet who has seen the inside of a basestar.

Racetrack serves as ECO on Raptor 1, plotting the best point of orbital entry when taking Commander Adama to Kobol to find and meet with President Roslin (Home, Part II). Since then, Margaret flies basic supply runs between Galactica and the fleet. She continues to light candles for fallen comrades in the Cylon attack. She is almost certain she will eventually die on a mission, and is more focused on taking out as many Cylons as she can before that happens (Final Cut).

Racetrack, along with many other pilots, intially snubs Helo upon his return because of his romantic relationship with the Caprica-originated copy of Sharon Valerii. After she insults Kara Thrace over the matter, Starbuck pushes Racetrack face-first into a card table ("Flight of the Phoenix"). Racetrack later congratulates Helo on his help with the Blackbird, whose DRADIS-absorbing carbon composites Helo suggested, which serves as a quiet apology for her earlier rudeness. 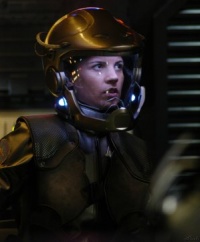 As with the rest of the Galactica crew, Racetrack is overjoyed when they reunite with the advanced battlestar Pegasus. She takes some time to socialize with Pegasus pilots in the hangar bay, not understanding why Starbuck is so upset about them keeping a "scorecard" of their kills ("Pegasus"). When Apollo is unconscious and drifting in space after ejecting from the Blackbird during the Battle of the Resurrection Ship, Racetrack's Raptor rescues him. Racetrack succeeds in reviving him using defibrilator paddles in her emergency gear (Resurrection Ship, Part II). Racetrack pilots a Raptor containing Apollo and a squad of Marines to check the refinery ship Daru Mozu for signs of sabotage by the Cylon sympathizer movement "Demand Peace", and her ship is almost caught in the explosion of a bomb they had planted there (Epiphanies).