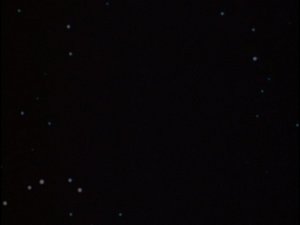 Apollo and Starbuck encounter the magnetic void (TOS: "Lost Planet of the Gods, Part I").

The magnetic void is a space phenomenon which obscures stars and causes sensor malfunctions on ships. A ship can find itself easily lost within such a void due to these navigational hazards.

A magnetic void was described in the Book of the Word during the exodus from Kobol. Adama finds the story useful in finding the planet, where he hopes to learn more about the path of the Thirteenth Tribe (TOS: "Lost Planet of the Gods, Part II").

After fleeing from Carillon, the Fleet heads into deep space coming across two locations, one of them being a magnetic void. Captain Apollo and Lieutenant Starbuck probe this void, which almost results in Apollo being lost were it not for the quick actions of Starbuck in extricating his flight leader from the void.

Buoyed by this discovery, Commander Adama consults his texts and considers entering the void. After discovering a cure for a strange virus and engaging the Cylons at an unnamed quadrant, the Fleet heads into the void (Into the Void). Within this void, the planet from myth, Kobol, and the coordinates to Earth are discovered before Lucifer attacks the Colonials on Kobol's surface (A Death in the Family).

The Fleet remains within the dubious safety of the magnetic void, during which shipmaster Shadrack works to outfit sub-light ships with lightspeed drives (The Memory Machine). The Fleet inevitably leaves the void when they make the jump towards Earth, whose coordinates are recovered after Adama uses the memory machine to remember what he saw within the tomb on Kobol (The Last Hiding Place).