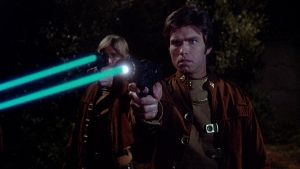 In addition to the regular, larger laser pistol worn by Warriors, smaller versions (a.k.a. "pocket pistols") are used by Warriors Troy and Dillon during their missions on Earth.

Aside from the standard issue "knob" muzzle, a second variant is used by Dillon and Troy on Earth featuring a translucent conical, flat-edged facing muzzle with a built in front sight fin and a black body. Unlike the standard issue version, the variant features a smooth surface with rounded edges and is mostly untextured, outside of a dial to alter the power output. This variant is seen only once, deployed by the aforementioned Warriors in order to till fields for seeding by the Super Scouts (1980: "Space Croppers").

Note: The "Buck Rogers" variant[1] is a dual term referring to both the appearance of the pistol in the eyes of Earth's people and the fact that the weapon is first used in the production of Buck Rogers in the 25th Century. Buck Rogers and Galactica 1980 often shared many of the same resources and props, as they were produced during the same time period.