Galactica discovers Kobol, and a chain of events are set in motion that threatens to change everything. 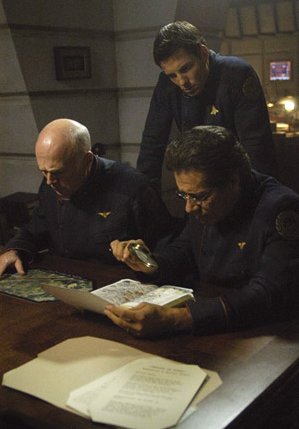 For answers to the questions in this section, click here.

Regarding the lack of definitive information regarding Kobol

"In the last two episodes it is noted by the priestess that the thirteen tribes left Kobol about "2000 years ago" and the initial estimate of the age of the ruins is the same, but nothing is concrete of course. This is where I have a problem: They were obviously a star faring civilization to leave Kobol to being with. To do so requires information technology. Why is their history of that time so sketchy and lacking of concrete records? Yes it was 2000 years in the past but come on, it's not like they only had papyrus to write on."

I've been presupposing some kind of cataclysm or crisis that occurred soon after mankind settled on the 12 worlds which either wiped out the knowledge base or had it deliberately destroyed for some reason. This doesn't seem that implausible when one considers that a tremendous amount of knowledge from the Greco-Roman tradition was lost after the fall of the Roman Empire and plunged the western world into the so called Dark Ages. Clearly, the Colonials did not fall all the way back to papyrus, and they do in fact, know that they are descendants of refugees from Kobol, hence the term "Colonies." They must have possessed star-faring technology at the time of the exodus, but I don't know how far we'll go into this specific backstory in the series, however.

Regarding Storyline Evolution and Potential Casting

It's sort of an explosion of jealousy that is a complete surprise to him because I don't think he's ... he's not fully aware of what he feels. There's something quite like a gut reaction that really was exciting to play. It was a surprise to me. [1]

Sharon Valerii: [as she pretends to be cleaning her hand gun] What’s going on?
Gaius Baltar: [cautiously] Well, I was going to ask you the same question. Actually, I was looking for Lieutenant Thrace but...sometimes it’s good to...talk these things over.
Head Six: [feigning pity] Deep down she knows she’s a Cylon, but her conscious mind won’t accept it.
Valerii: Sometimes I have these dark thoughts.
Baltar: What kind of dark thoughts?
Six: Her model is weak, always has been. But in the end she’ll carry out her mission.
Valerii: I don’t know, but I’m afraid I’m going to hurt someone. I feel like I ought to be stopped.
Six: [moving to the other side of Valerii] She can’t be stopped. She’s a Cylon. You can’t help her, Gaius...but you could probably sleep with her. That’s what you want, right?
Baltar: [to Valerii] I’m not sure why...sometimes...we must embrace that which opens up for us...
Sharon Valerii: Embrace?
Gaius Baltar: Life can be a curse as well as a blessing. [more intensely] You will believe me when I tell you: there are far worse things than death in this world.
Sharon Valerii: So you’re saying…?
Gaius Baltar: No. No, no, no. What I say...is meaningless. Listen to your heart. Embrace that which you know to be the right decision.
[They look at each other as Six regards Baltar with a look of complete incomprehension, then Baltar stands and kisses Boomer on the forehead before walking out of the bunkroom. Seconds later there is the sound of a single gunshot from inside.]

Lee Adama: Going hunting?
Kara Thrace: [loading ammunition into the Cylon Raider] I'm manning the gunnery for the jump test tomorrow. See if our boy here can shoot anything with our ammo.
Adama: So it's a boy now.
Thrace: I changed my mind.
Adama: You ever wonder why everyone else calls it a "she", but to you, it's a "he"?
Thrace: That's fascinating, Lee. You should write a paper.
Adama: Well, that's not really my style. I'm not as smart as...say, Doctor Baltar. How is the Vice President, by the way?
Thrace: I don't know. Haven't seen him.
Adama: [thinks for a second] So...he's a love-them and leave-them kind of guy, I guess.
Thrace: I guess.
Adama: Ships just pass in the night...
Thrace: Yep.
Adama: Didn't mean a thing.
Thrace: No.
Adama: You were just bored, looking for something to do. So frakking the Vice President of the Colonies seemed like a great waste of time!
Thrace: Do you want something from me?
Adama: Not a thing—
Thrace: —because I don't owe you anything.
Adama: No, you don't owe me anything. Because I'm just a CAG, and you're just a pilot. A pilot who can't keep her pants on! Oh, it's just like old times, Kara. Like when you got drunk and you couldn't keep your hands off the major—
[Thrace turns around and swings a punch at Adama, but Adama returns the favor by punching Thrace in the eye.]
Adama: Why'd you do it, Kara? Just tell me why.
Thrace: Because I'm a screw-up, Lee. Try to keep that in mind.

William Adama: [to Thrace] Go ahead.
Kara Thrace: I believed you. Believed in Earth.
Adama: What are you doing, Starbuck?
Thrace: Bringing home the cat, sir.
Adama: We can talk about this.
Thrace: No, I don't think so.
Adama: I want you to remember one thing. I do not regret anything that I did. Be sure that whatever you're going to do, you don't regret it later. Do you understand me?
Thrace: I guess we'll find out. [Thrace uses the FTL computer to jump to Caprica.]
Lee Adama: Galactica, Apollo. Starbuck has jumped away. Repeat, Starbuck has jumped away.
Saul Tigh: She wasn't scheduled for a jump test! Where the hell did she go?
Adama: Home.