Difference between revisions of "Katee Sackhoff"

Kathryn Ann Sackhoff, credited as Katee Sackhoff, is an American actress who portrays Kara "Starbuck" Thrace in the Re-imagined Series.

After her stint on Battlestar Galactica, she continued her portrayal of smart and tough individuals, following up "Starbuck" with a turn as Victoria "Vic" Moretti on Longmire, Bo-Katan Kryze in three Star Wars television spin-offs, Niko Breckinridge in Netflix's Another Life, and a villainous turn as Amunet Black ("Blacksmith") in DC Comics' The Flash television series for The CW.

Sackhoff was born April 8, 1980 and raised in and around St. Helens, Oregon. She took up swimming and planned to continue with the sport when she got to college, hoping to have a career as a competitive swimmer, but a knee injury ended those plans (just as a knee injury ended her character's plans of being a professional pyramid player). After this, she took up acting when she was 16.

Sackhoff starred opposite Richard Dreyfuss and Marcia Gay Harden in the CBS series, The Education of Max Bickford. On the big screen, she appears in Dimension Films' Halloween: Resurrection. She was also featured in the films My First Mister with Christine Lahti and The Glass House with Diane Lane.

Upon graduating from high school in Portland, Oregon, Sackhoff moved to Los Angeles, where she landed the lead role in the MTV pilot Locust Valley. She went on to star in the Fox Family Channel series The Fearing Mind. Sackhoff's other television credits include a recurring role on MTV's Undressed, guest spots on ER; Zoe, Duncan, Jack & Jane and Chicken Soup for the Soul. She also had a supporting role in the USA Network film Hefner: Unauthorized. She recently appeared in the TV movie How I Married My High School Crush and the films White Noise 2 and The Last Sentinel.

During early production of Season 4, Sackhoff worked with Battlestar alumni Executive Producer David Eick and cast member Mark Sheppard, who played Romo Lampkin, on a reimagined version of Bionic Woman in which Sackhoff played the show's recurring villain, a bionic woman named Sarah Corvus. Conveniently for Sackhoff, Bionic Woman was also filmed in Vancouver -- in fact using the same studio as Battlestar Galactica. A victim of low ratings and the 2007-08 Writers Strike, Bionic Woman was cancelled after less than 10 episodes, with Sackhoff's story arc left unresolved.

According to Ron Moore and David Eick, in the podcast for "Lay Down Your Burdens, Part II", Sackhoff no longer dated a tackle from the Kansas City Chiefs.

Sackhoff has a dog named "Meatball" and another named "Nelly B" after her The Education of Max Bickford character, is 5'6" tall, and wears a thumb ring on one of her hands. This piece of jewelry was written into the series and is said to be an engagement ring from Zak Adama. Sackhoff decided to quit smoking when she received fan mail from young girls saying they want to be like "Starbuck" when they grew up.

Sackhoff was reportedly nearly a lock to land the role of Bryce Adams, a character intended to replace Jorja Fox's Sarah Sidle on CSI, as executive producers Carol Mendelsohn and Naren Shankar are huge fans. Executives at CBS and Jerry Bruckheimer Television weren't sold by her reading for the part, however, so she didn't get the role.[1] Sackhoff did later appear on the series as Detective Frankie Reed in three episodes over the course of 2010 through 2011.

In a 2009 interview with Entertainment Weekly, Sackhoff revealed that fan response to her being cast as Starbuck was so intense, she even received a mailed death threat.[2]

Following the end of the Re-imagined Series, Sackhoff kept in touch with her fellow co-stars. In one instance, Sackhoff co-created the Acting Outlaws motorcycle-riding charity with her friend Tricia Helfer ("Number Six"), raising awareness and funding for a variety of causes from 2010-2016.

As a result of Battlestar Galactica, her career has since grown to involve many recurring roles in television shows and movies, notably as unique yet strong characters, including Victoria "Vic" Moretti on Longmire from 2012-2017.

As a Star Wars fan, a trait she shares with her father, she was overjoyed to be able to play Bo-Katan Kryze, a Mandalorian warrior, as both a voice actor (in Star Wars: The Clone Wars and Star Wars Rebels) over the course of several years and, for The Mandalorian live-action Disney+ series, becoming the actor to give physicality to the role in the suit. 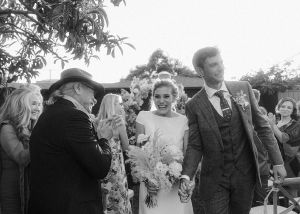 During production of Battlestar Galactica, Sackhoff dated film producer Scott Niemeyer beginning in 2005, leading to his marriage proposal in 2012. This engagement ended in 2014.

Sackhoff is known for having dated genre actor Karl Urban, first meeting each other around 2014 on a plane en route to a Montreal science fiction convention, from 2014 to 2018.

In 2018, Sackhoff began dating actor-producer Robin Gadsby, who met on the set of the genre Netflix series Another Life. After getting engaged on April 10, 2020 in British Columbia, Vancouver (during filming of Another Life's second season), they married in October 2021.[3]

Sackhoff has three tattoos. First, she has a crucifix tattoo on her left shoulder blade. As Christianity is not practiced in the Battlestar Galactica universe, it is covered up in the show by bandages in scenes when her skin is exposed (her scene with Anders at the beginning of "The Farm", for example). Since "Unfinished Business" it has been inked over with a large stepped pyramid. 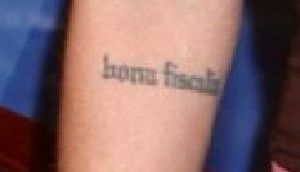 She also has a tattoo of the Chinese character for "choice" on the back of her neck. In Season 1, they usually tried to avoid using camera shots that caught her at that angle, but observant viewers will still notice it. Her hair was longer in Season 2, but when tied in a ponytail, it is nonetheless visible.

Her third tattoo is on the inner side of her right forearm, just below the elbow. It consists of the words "bona fiscalia", which is Latin for "public property". According to Sackhoff, it is a reminder to herself that, by choosing to be an actress, she has chosen to be in the public spotlight and will be regarded as a role model whether she likes it or not.[4] This tattoo is visible in numerous episodes. At the beginning of the show, they tried to avoid showing it, for example by having her tuck her arm slightly behind her back in wide-shot. However, it is still visible on many occasions and, over time, they gave up trying to hide it.