When the Cylons attacked the twelve homeworlds of the Cyrannus system, its Human leadership decided to unite against the common threat. The Articles of Colonization established the Twelve Colonies of Kobol. Part of the incentive to join was that each of the Colonies would receive a Jupiter-class battlestar (RDM video game: Battlestar Galactica Deadlock game intro).

These ships were produced one by one by Daidalos, a major space station and shipyard. Galactica was the second ship of the class, and delivered to Caprica. Unfortunately, the vessel went missing two weeks into deployment.

Following the loss of Colonial Fleet HQ at Picon, Rear Admiral Lucinda Cain of Daidalos inherited command of the remaining fleet. Her first order was to complete Athena, fifth ship of the class, and deliver it to Picon. While at Scorpia, Daidalos came under attack from the Cylons. The station's defended repelled the attackers, protecting Daidalos and the moored Athena (RDM video game: Battlestar Galactica Deadlock: Season 1 mission: "Mission 1: Scorpia").

After jumping to Picon, Athena was launched and initially placed under the command of Daidalos. Together, the flotilla repelled more Cylons, including a pair of Nemesis-class, Talon-class and war drive raiders (RDM video game: Battlestar Galactica Deadlock: Season 1 mission: "Mission 2: Athena").

Around the 5th to 7th year of the conflict, Daidalos jumped to Aerilon to deliver Demeter, the eighth Jupiter battlestar. It was the first Jupiter named after it's colony's patron Lord of Kobol, Demeter. Demeter was successfully delivered, amidst an attack of Cylons. Due to internecine conflict among the Colonials, Cain and Agathon expected that the 9th Jupiter would still be completed and delivered to Canceron, but that Sagittaron and Gemenon would be exempt due to sanctions placed on them. On top of that, Aquaria had pulled out of the project (RDM video game: Battlestar Galactica Deadlock: Sin and Sacrifice mission: "Mission 1: Demeter").

Galactica was crippled by Cylon forces and crash-landed in an Caprican ocean. Cain dissolved the Colonial fleet. 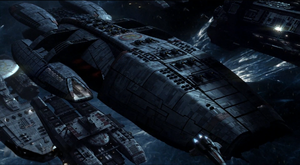 In the war's 10th year, three Jupiters were involved in a battle with Cylons. While Galactica survived, Columbia was destroyed (TRS: "Razor Flashbacks").

Columbia may be the ninth Jupiter, meant for Canceron.

Following the end of the Second Cylon War, Galactica was depopulated at Earth (second) and piloted into the system's star (TRS: "Daybreak, Part II").