The title of this page given above is incorrect, due to technical limitations. The correct title is iTunes. iTunes is a free music and multimedia viewing application from Apple, available for both Microsoft Windows and Apple's Mac OS X operating systems. (Linux and other operating systems are not supported.)

The iTunes software allows users access to the iTunes Store, which use to contain podcast commentaries of Battlestar Galactica episodes as well as the actual episodes themselves available for download and viewing.

While the downloaded episodes (as well as podcasts) can be transferred and played on Apple's portable music/video player, the iPod, viewers need only the latest version of iTunes to download and watch the episodes -- an iPod itself is not required.

Use of the iTunes Store requires the user to create an "Apple ID" (though an AOL account can be used as an Apple/iTunes ID) to log into the iTunes Store and its video selections. A credit card or pre-paid card is required for purchase of downloadable material.

In September 2007, Apple and NBC Universal canceled their deal to host all NBC related content on iTunes -- including Battlestar Galactica and Eureka. Instead, NBC signed a deal with Amazon to be included in the online retailer's Unbox service.

There are currently several different podcasts relating to the Re-imagined Series available from the iTunes Store: 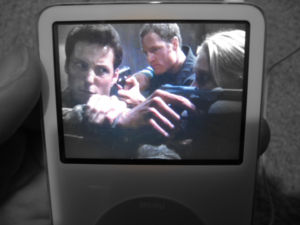 The iTunes Store offered Battlestar Galactica episodes for download prior to NBC's deal with Amazon Unbox for video downloads.