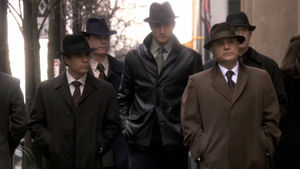 The Ha'la'tha's gautrau at the time of the Caprica Series maintains a policy of neutrality with regard to political events on Tauron, even though his organization had been founded as a resistance movement against the currently-ruling dictatorship. Even so, when the second Tauron Civil War breaks out, Sam and Joseph Adama, as well as various other Ha'la'tha, become disillusioned with this policy and force the overthrow of the gautrau by his daughter, who proves more amenable to supplying rebel forces with Greystone Industustries U-87s.