For the canonical version of Galactica from the Original Series, see: Galactica (TOS).

Galactica is one of the Colonial warships built in direct response to the generational war with the Cylon Empire.

As a military ship, Galactica features a detention chamber capable of imprisoning Centurions for interrogation, equipped with a gamma frequency field generator to cut off the enemy from access to the Cylon's network. The chamber is outfitted with a restraining chair capable of holding a typical Mark V Centurion.

A sole survivor from a Centurion stealth team detached to Burania is imprisoned in the detention chamber following a failed incursion into Galactica's science deck, itself later destroyed — along with most of the chamber — after a test of the recovered nano-cybrid (Battlestar Galactica: Cylon Apocalypse #1).

Galactica's science operations are established on a science deck, where scientists like Dr. Wilker operate in various laboratories.

A surviving nano-cybrid sample from Burania is brought to Wilker's lab, leading to an incursion by a Centurion stealth team that breaches the hull connecting said deck in an attempt to recover the disastrous nano-cybrid from Colonial hands (Battlestar Galactica: Cylon Apocalypse #1).

While Boomer works to decrypt McKintosh's data chip, Diana destroys part of the server room to prevent this, as the data chip contains information that links Councillor Osiris into the attack on Umbra (Battlestar Galactica: Starbuck #2—#4).

Galactica features a supply vault that can be defended against incursions.

During the capture of Galactica by Cylon forces, Apollo instructs Dwyer to bring the civilians and children to the third hangar[1] within the supply vault

As one of the many battlestars active during the Thousand-Yahren War, it saw action during multiple engagements, including the Hasari Routs and the Second Siege of the Cosmora Archipelago (Battlestar Galactica: Cylon Apocalypse #1).

By 7335, Adama commands Galactica, with his eldest son and daughter, Apollo and Athena respectively, serving aboard. Boomer, Jolly and Starbuck would later serve aboard the ship following their graduation in 7335 (Battlestar Galactica: Starbuck #1).

Much of Galactica's operational history is refocused around shepherding its rag-tag, fugitive fleet from Cylons with strategically defensive and evasive postures, instead of offensive military operations. This is tested in the weeks following the exodus, particularly when Adama dispatches his finest warriors to a hazardous mission to Maytoria that results in immediate failure; in other circumstances, Adama would have engaged in an offensive operation to recover his pilots, but is overruled by the greater mission of shepherding the human race (Classic Battlestar Galactica Vol. 1 #1).

Following the Battle at Galaxy's Edge, the Fleet happens across the Canopus wormhole, a potential shortcut to the fabled Earth. On the other side of this wormhole is a lone Cylon planet, consisting of a Cylon mainframe in a city known as Tessida. In order to make good on their escape from the Cylon tyranny, Adama makes use of Galactica's formidable offensive potential to stage an attack against this installation, utilizing its rarely-used lightspeed potential in order to surprise the Cylons while Vipers bomb the city with weaponized missiles, whose warheads are outfitted with a destructive and pervasive nano-cybrid (Battlestar Galactica: Cylon Apocalypse #3—#4). 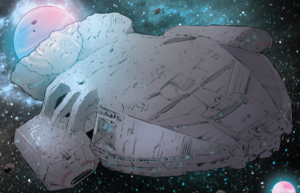