Difference between revisions of "Galactica"

Battlestar Galactica is the most famous warship in the Colonial fleet. Built in time to participate in the Cylon War she remained the only military vessel not to be ungraded with the new integrated defence systems developed by Dr. Gaius Baltar and his team. Because of this, she became the only battlestar to survive the renewed Cylon attack on the 12 colonies, some 40 years after the end of the first war.

Current Status: Undergoing decommissioning and hand-over to civilian authorities at the time of the 2nd Cylon attack on the twelve colonies.

Galactica was one of the first five battlestars to be laid down by the Colonials, the others being the Columbia , Rycon, Atlantia, and Pegasus (Zoic). As such, she is some 50 years old (Mini Series). Following the outbreak of Cylon hostilities, seven more battlestars were laid down: Pacifica , Triton, Acropolis, Solaria, Promotheus, Argo and Poseidon - giving the Colonials one battlestar representing each of the twelve colonies (Zoic / Mini-Series). The Galactica was first captained by Commander Dash (Mini-Series).

These vessels were all designed with non-integrated systems, a result of the fact that the Cylons demonstrated an ability early-on in the war to override or subvert networked command and control systems (Mini-Series). Instead, the battlestar depended on its sheer bulk and defensive / offensive capabilities to ward of any threats to itself or the colonies.

Following the armistice with the Cylons, and their withdrawal from Colonial space, the Galactica and her sister ships continued to serve the 12 colonies in a wide variety of roles. While her surviving sister ships may have been upgraded to match the systems capabilities of more modern colonial vessels, the Galactica continued in service without any of her systems being fully networked or integrated, making her unique among Colonial military vessels (Mini-Series.

With her active career drawing to a close, a decision was taken to retire the Galactica and decommission her from service. However, due to her unique status a decision was taken not to scap her, to turn her into a combination of living museum to the original Cylon War and an educational centre (mini series), with her conversion being overseen by her final Commander, William Adama (Mini-Series).

At the time of her formal decommissioning ceremony, Galactica had been stripped of all but one of her operational Viper squadrons, all her munitions had been removed, and her starboard landing pod converted into a pressurised museum housing (among other things) a full squadron of 20 Mark II Vipers (mini series).

With the unexpected resumption of hostilities on the part of the Cylons, the Galactica quickly proved her worthiness as a warship was far from over as she withstood a direct hit from a tactical nuclear weapon, and then took on a flotilla of some 3 Cylon basetars after re-arming herself at the Ragnar Anchorage, providing an umbrella of fire cover under which the surviving people of the 12 colonies were able to escape the Cylons on some 60 civilian vessels.

Since the exodus of the Colonials from their overrun homeworlds, the Galactica has become both protector and provider for the fleet. She has provided direct fire-cover for the fleet during Cylon attacks no fewer than 240 times (33, Act of Contrition); she is providing much of the fleet with recycled water (Water) and she is the primary source of medical care, with groups of civilians routinely being brought aboard for check-ups, etc. (Litmus). She has also undertaken internal policing duties within the fleet (Water, Bastille Day).

Despite her meagre offensive capabilities in terms of available fighters, lack of pilots, no marine assault force, etc., - the Galactica has also been able to successfully go on the offensive against the Cylons (The Hand of God), capturing a fuel mining and processing plant in the process.

The Galactica shares the same overall technical specifications as other Colonial battlestars, with the following key differences:

The Galactica and her sister ships were the Colonial response to a need for massive capital ships which arose during the 1,000-Yahren war with the Cylons. Introduced some 500 yahren into the war, she and her sister ships combined the roles of battle cruiser and aircraft carrier, having a massive offensive capability in terms of on-board weapons and Starhound Viper space superiority fighters.

The Galactica served with distinction throughout the war, and at the time of the supposed Peace Treaty at Cimtar, was presumed to be one of only five surviving battlestars in the Colonial fleet.

This section requires information on the history of the original Galactica 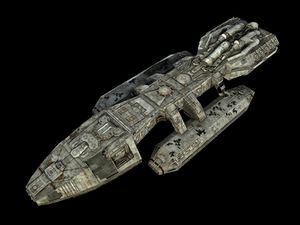 Battlestar Galactica from the Video Game

The Galactica of the video game is predominanylt based on that of the original series, but with notable changes, designed to reflect her 500-year service and the fact that she has had to rely on alien technology for upgrade / refit. Text from the game notes:

The Battlestar has been repaired often and parts of its structure are clearly newer or are made of stranger, alien materials. Parts of the huge engine nacelles are broken and partly scaffolded, the repairs half-complete, the exposed structures vast and skeletal.

Given the ship is based on the original, it is logical to assume her displacement, capabilities and dimensions mirror those of the original Galactica given above, and the battlestar design.