The so-called Five-engined vessel[1] is a Colonial ship used by the people of the Twelve Colonies of Kobol.

The ship maked its first appearance in the skies above Caprica City before the Cylon attack, seen through the window above Secretary Laura Roslin's head when she learns of her cancer diagnosis.

Another vessel was seen from above amongst the civilian ships abandoned by the FTL-capable ships when the Cylons found the Fleet (TRS: "Miniseries"). 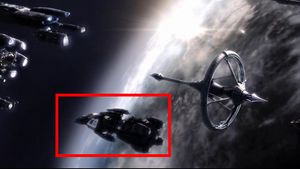 The Five-engined vessel makes its escape from New Caprica.

Another ship of this type is also present during the Fleet's emergency jump away from New Caprica after the Cylons discover the location of the Colonials (TRS: "Lay Down Your Burdens, Part II").