Difference between revisions of "Ellen Tigh" 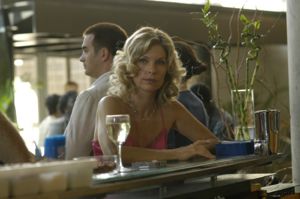 Ellen Tigh is a man-hungry predator, and the reason, according to William Adama Saul Tigh took to drink. While her husband was away from home, she apparently "went through half the fleet".

Estranged from her husband, Ellen Tigh claims to have been on Picon at the time of the Cylon attack, on her way back to Gemenon for a reunion with her husband. When the airport was hit in the attack, she claims some un-named heroic soul found her unconscious body and got her on to one of the last transports out, and she has been unconscious aboard the Rising Star for some three weeks prior to Adama finding her.

Following her reunion with her husband, Ellen claims she wants to make a fresh start (Secrets and Lies), but no sooner as Tigh - still hopelessly in love with her - agreed, than she is getting him back on the bottle and is flirting openly with other men - first an unwilling Lee Adama, with whom she tries to engage in a game of footsie under the table while she and her husband have dinner with Lee, his father and Laura Roslin. Later she flirts with Gaius Baltar with greater effect - annoying her husband in the process.

Not only are her claims of rescue suspect - no-one on the Rising Star can remeber treating her through her long weeks of unconsciousness - Ellen takes an unnatural interest in Adama's plans to lead the fleet to Earth, almost badgering him into trying to reveal how long the journey will take. Her actions seem to support Adama's cautionary - and unbeknownst to Tigh - act of having Baltar scan her blood sample to see if she is a Cylon.

While Ellen's mischief-making could be put down to her nature, and so hidden desire to drive a wedge between her husband and Adama, she does appear to be human, according to Baltar's tests.