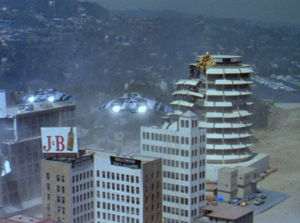 Dr. Zee's simulation of a Cylon attack on Los Angeles.

Thirty years after the Battle of Cimtar, the Fleet's quest to find the Thirteenth Colony of Earth becomes a reality.

Much to the dismay of Adama and his Galactica crew, their brother tribe on Earth was underdeveloped technologically in comparison to the destroyed worlds of the Twelve Colonies of Man and would not be able to defend themselves from any Cylon encounters. At the time of their arrival, the year is 1980 CE

Adama and Doctor Zee map out a plan to accelerate Earth technology to aid in their defense with Warriors Troy and Dillon leading expeditions to the planet (1980: "Galactica Discovers Earth, Part I").

Earth's composition is very much astonishing to the Colonials. According to Adama, Earth's "proximity to the sun provides the only climate in the galaxy comfortably able to support life as we know it." Furthermore, he explains that seven-tenths of the Earth is ocean, which astonishes the council members and the Warriors present, but assures them that there's "plenty of room for all our people."

He further notes that the seven principal landmasses, two of which (Antartica and the North Pole) are polar ice caps, could be "easily reclaimed" by their technology (1980: "Galactica Discovers Earth, Part I" ). 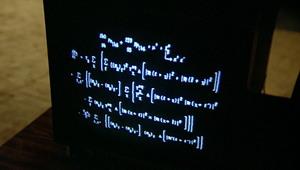 At the time of 1980, nuclear power is a major concern on Earth, particularly due to the waste it generates. One of Earth's prominent nuclear physicists, Dr. Donald Mortinson, has been working on a theory to dissolve nuclear wastes (i.e. nuclear degeneration, a theory that Colonials are taught, though most apparently understand) for three years prior to the Galacticans arrival.

As such, Troy and Dillon leave a "calling card" and correct the formula, which Mortinson recognizes as one from an intelligent extraterrestrial society (1980: "Galactica Discovers Earth, Part I").