Dirk Benedict (born as Dirk Niewoehner on 1 March 1945) is a American film and television actor.

Born in White Sulphur Springs, Montana[1], Benedict chose his stage name from a serving of Eggs Benedict he had enjoyed prior to his acting career.[citation needed] His father was a lawyer who shared a love of the outdoors with his son, who spent "hours just going into the mountains for target practice" firearms and hand-made archery equipment.[1]

Benedict was an excellent high school athlete and aspiring musician, who learned to play trombone, piano and guitar[1]. After entering Whitman College in Walla Walla, Washington to pursue a major in music, he was dared by members of the Phi delta fraternity (who were also members of the freshman football team) to audition for the musical Show Boat. Despite no previous experience or exposure to theater, he was given the lead role of Gaylor Ravanal, a part that consisted largely of signing and acting.

I tried to get out of it, but the head of the department wouldn't let me. I was a pledge in a jock fraternity. A couple of my friends came down to help, and in the course of the years that followed, the Phi Delta fraternity became the number one cracker-jack set builders for the theater. The guys loved it. They liked being around all the theater freaks, and I was sorta the bridge between them.[1]

The success of this role for Benedict lead him to star in additional productions, though he suffered problems with his major:

I didn't get along with the head of the music department. I would write things that didn't adhere to the roles, and he was afraid I was wanting to break rules before I understood them. I was too avant garde, and I wasn't good in the ear-training aspect.[2]

Graduating from college with a degree in Music, Benedict decided to pursue acting as a career, under the tutelage of John Fernald. Benedict played many roles in summer stock, performing many roles in classic plays by Shakespeare and Ipsen.

Benedict moved to New York and found supporting roles in several Broadway shows, including the leading role in the play, Butterflies Are Free with the late Gloria Swanson, who portrayed his mother.

Benedict found himself in small but interesting roles in some TV series, including work in Hawaii Five-O and the lead in a one-season show by TV show mogul Aaron Spelling called Chopper One. Benedict left acting for a few years in a lifelong desire to visit every state in the U.S.

Benedict's casting as "Starbuck" in Battlestar Galactica made him nationally famous. He made an appearance on the final episode of Galactica 1980, entitled "The Return of Starbuck". This episode is considered by fans of the Original Series as the only significant contribution from Galactica 1980, a show otherwise considered noncanonical by many. 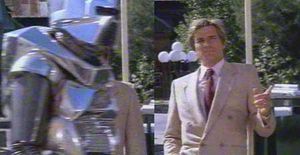 After these series, Benedict found popularity again as the character of Templeton "Faceman" Peck on the long-running early-1980s TV series, The A-Team, produced by Galactica's owner, Universal. The show's opening credits featured a sequence, taken from an early episode of the series, in which a Cylon Centurion is shown walking by Benedict's character, who gives a peculiarly humorous look of recognition of the robot as an in-joke to the actor's past role as Starbuck. (The context of the original episode was that Faceman was visiting the Universal Studios theme park in Hollywood.)

Benedict returned to the stage after Galactica as well, gaining fame in many popular roles there, and played guest and starring roles in a handful of TV movies and series.

As casting for the Singer/DeSanto Continuation Project of a new Battlestar Galactica series in 2001 began, Benedict was slated to play an older Starbuck in the new series. However, the project folded due to Bryan Singer's movie directing comittments and delays on the TV industry caused by the September 11, 2001 terrorist attacks.

Benedict (with fellow Original Series actor Richard Hatch) loaned his voice talents as the Original Series Starbuck to the Battlestar Galactica video game that appeared in 2003. The characters of Starbuck and Apollo are available as wingmen pilots for the game player, using a game cheat. 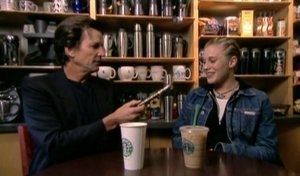 The "Starbucks" meeting over coffee at Starbucks.

Benedict has yet to be cast in the Re-imagined Series. He was considered for the role of the Armistice Officer, but passed on the project. In another instance, he was considered to play a cigar-smoking God of the Cylons in a dream sequence with Gaius Baltar in a Season 1 episode, but the idea was later dismissed. The original "good mood" towards the new series resulted in a meeting with Katee Sackhoff at a Starbucks coffee shop as seen in the mini-series Lowdown. Benedict passes a cigar to Sackhoff in a kind of "passing the torch" ceremony.

However, in a May 2004 article from Dreamwatch magazine entitled "Starbuck: Lost in Castration" [3], Benedict harshly criticized the Re-imagined Series, citing its dark tone and supposed moral relativism:

"Re-imagining", they call it. "un-imagining" is more accurate. To take what once was and twist it into what never was intended. So that a television show based on hope, spiritual faith, and family is unimagined and regurgitated as a show of despair, sexual violence and family dysfunction.

Benedict devoted the greatest part of the article to criticizing the producers' decision to turn Starbuck into a female character, Kara Thrace (whom Benedict derisively calls "Stardoe" throughout his commentary), tying it in to what he perceived as a general anti-masculinity agenda:

One thing is certain. In the new un-imagined, re-imagined world of Battlestar Galactica everything is female driven. The male characters, from Adama on down, are confused, weak, and wracked with indecision while the female characters are decisive, bold, angry as hell, puffing cigars (gasp) and not about to take it any more.

And if you don't enjoy the show [...], it's not the fault of those re-imaginative technocrats that brought them to you. It is your fault. You and your individual instincts, tastes, judgement. Your refusal to let go of the memory of the show that once was. You just don't know what is good for you. But stay tuned. After another 13 episodes (and millions of dollar of marketing), you will see the light. You, your instincts, your judgement, are wrong. McDonald's is the best hamburger on the planet, Coca-Cola the best drink. Stardoe is the best Viper Pilot in the Galaxy. And Battlestar Galactica, contrary to what your memory tells you, never existed before the Re-imagination of 2003.

I disagree. But perhaps, you had to be there.

Benedict married actress Toni Hudson in 1986 but they divorced nine years later. He lives in Montana with his sons, George and Roland. At Galacticon, the 25th anniversary convention, Benedict revealed that he has a third son named John. Unknown to Dirk, John was born in 1968 and given up for adoption. They connected for the first time when John was an adult.

On January 3, 2007, Benedict was the eleventh housemate to participate in the United Kingdom version of Celebrity Big Brother. He arrived, accompanied by the A-Team TV theme in a replica A-Team van, smoking a cigar as he entered and claiming of a whole stock of cigars in his bag.

Well, this is my coming out party - and probably my 'going back in hiding again' party! I expect 25 days of absolute hell, I can't find one thing that I'll like about it. I don't like celebrities, I don't hang out with actors, I hate being in front of the camera.[4]

Benedict came 3rd in the final day of Big Brother on 28th January 2007 winning 16% of the public vote. "I need to think of my funny, witty things to say!" he said on his way out of the house. He left the house in cheering applause, saluting the public as they chanted the A-Team theme tune. [5]