For others with this same first name, see: Diana.

Diana "Hardball" Seelix is first a deckhand and later a Viper qualified pilot aboard Galactica.

She survives the crash of Raptor 1 on Kobol (TRS: "Kobol's Last Gleaming, Part II"). She uses some basic medical training to attend to Socinus' wounds ("Scattered", "Valley of Darkness").

Seelix suffers a bullet wound to her leg while escaping a Cylon anti-aircraft emplacement on Kobol, but Cally Henderson drags her to safety. The group is later rescued by Galactica (TRS: "Fragged").

Later, Seelix returns to duty aboard Galactica with Chief Tyrol's deck crew. There, she and the other deckhands throw a welcome back party for Henderson when she is released from the brig.

She assists in the construction of the Blackbird (TRS: "Flight of the Phoenix"). Seelix's specialization is in avionics (TRS: "Dirty Hands"). 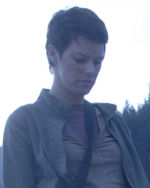 After the discovery of New Caprica she settles on the planet. When the Cylons find and occupy the planet, she becomes active in the resistance movement and helps to rescue many people - including Cally Tyrol, Laura Roslin and Tom Zarek--from a Cylon Centurion execution squad (TRS: "Exodus, Part I").

Shortly after the exodus from New Caprica and her return to Galactica, Seelix becomes a member of the Circle, a secret presidential tribunal tasked with trying, convicting and executing humans who collaborated with the Cylon. She is among the less scrupulous members. (TRS: "Collaborators").

Some time later, she accompanies the Tyrols to airlock 12 on deck 14, where maintenance needs to be performed. When the Tyrols are trapped in the airlock and it begins to depressurize due to a small but widening hole in the hull, she tries unsuccessfully to reopen the inner airlock doors from the observation booth. Seelix cares for Nicholas Tyrol while his parents are recovering in Galactica's sickbay from their exposure to space during their rescue (TRS: "A Day in the Life").

At an unspecified point in time, Seelix applies to become a pilot, passing the written exam with flying colors but is rejected because she is one of the best available avionics specialists and the Fleet needs every able-bodied person available to stay where they are to keep itself operational. After the workers' strike aboard Galactica and the refinery ship is resolved, Seelix is promoted to Ensign and begins flight training (TRS: "Dirty Hands").

She becomes a skilled Viper pilot - callsign "Hardball" (TRS: "He That Believeth In Me") - demonstrated by successfully destroying a missile meant for Colonial One during the Battle of the Ionian Nebula. Seelix is part of the Demetrius's crew on its mission to find Earth (TRS: "The Ties That Bind"). There she becomes involved in the mutiny against Kara Thrace, revealing her belief that Thrace is a Cylon and should be airlocked (TRS: "Faith").

Seelix participates in the Battle of the Resurrection Hub. She urges a panicking Eammon Pike to not jump away from the battle after his Raptor is damaged, and fires nuclear missiles to destroy the Hub (TRS: "The Hub").

After the discovery of a devastated Earth, Seelix is on the hangar deck when Adama's Raptor returns from the surface. She later is the first to note Anastasia Dualla's suicide and tends to the dying woman (TRS: "Sometimes a Great Notion").

Seelix later confesses to Anders that she feels her prior relationship with him was a fabrication since he is a Cylon. He attempts to explain that his emotions were genuine at the time, but she is merely distracting him. Several kidnappers come, cover his face, and beat Anders. Seelix and the men are participants in the mutiny led by Felix Gaeta (TRS: "The Oath").

The mutiny is thwarted, and Seelix is sent along with the other surviving mutineers to the Astral Queen[2].

Weeks later, Admiral Adama offers the mutineers their freedom in exchange for participating in what is essentially a suicide mission to rescue Hera Agathon from Cavil's forces. It is is unknown if Seelix accepts this offer.

Since she does not appear in the final episode, Seelix's ultimate fate is unknown. If she survives the final battle or chooses not to participate, she presumably settles with the rest of the Colonials on the planet they decide to call Earth.