Designer Peter Laird admiring the DDG-62s mounted on the Blackbird.

The DDG-62 is a model of sublight engine, outdated by the time of the Fall of the Twelve Colonies. The engines are apparently meant for small, one-man craft, and provide ample acceleration that seems to match that of a Viper Mark II.

During the construction of the Blackbird, a prototype craft devised by Galen Tyrol and constructed by crew of Galactica, Colonel Saul Tigh offers Tyrol a pair of these engines that are taking up space in the Baah Pakal's cargo hold (TRS: "Flight of the Phoenix").

The engines were designed by aeronautical engineer Peter Laird, who says that they were mostly phased out of use 10 years ago (TRS: "Pegasus"). 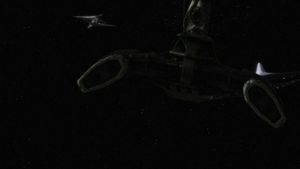