Explosive spaceborn device deployed by the Cylons in the Nova star field (Saga of a Star World). In an already dangerous area of space, destroying the mine field was an extremely risky mission, but the only viable option left open to the Fleet. Apollo, Boomer and Starbuck launched in specially shielded Vipers to clear the Cylon minefield.

The Cylon mine can withstand temperatures capable of melting the hull of a Colonial Viper, but a single shot from a Viper mounted laser is enough to destroy the mine. 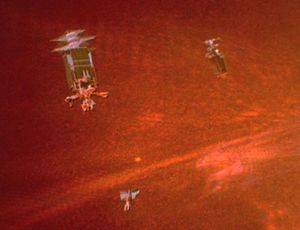 [A section of the Cylon minefield