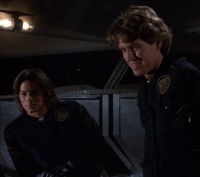 Council Security is a civilian agency within the Fleet that is responsible for policing, prisons, and other security considerations of the civilians, including the Quorum of Twelve, yet also seem to act as military police.

Much like Colonial Warriors, they are armed with laser pistols and clearly have a presence aboard Galactica, as their uniforms (in later episodes only) of those stationed aboard Galactica bear the ship's insignia, and in an early episode they investigate a petty crime on the ship. Reese is a member of the organization.

The scope of their duties is not entirely clear. In "Lost Planet of the Gods, Part I", they appear to simply be police (and can be construed as evidence that the Colonial Warrior force does not have its own military police) – two such officers attempt to discover who stole provisions from the Galactica's Officer's Mess, until thwarted by Colonel Tigh. In two later episodes, they are clearly serving the Council's interests and are at odds with the military. In the later episodes they also have jurisdiction over the prisoners of the Prison Barge, and perform prisoner transfer (not unlike US Marshals or county sheriffs), as shown in "Baltar's Escape". Also (reminiscent in of the US Secret Service), they guard, and answer directly to, the Quorum of Twelve (Greetings from Earth). It is quite possible that the Council Security are a branch of a more general Security force (as the early-episode officers were referred to simply as Security), or are even a separate organization. Another possibility is that the scope of their mandate changed over time as tensions between the civilian Council and Adama's military grew.

Due to the color of their uniforms, some of the Warriors refer to them by the derogatory term "Blackshirts".