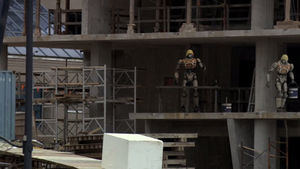 CEO and founder of Graystone Industries, Daniel Graystone conceives of a race of sentient machines to serve humanity in the Colonies during the testing and construction of the U-87 Cyber Combat Unit - a military robot commissioned by the Caprican Government and first Cylon to be introduced in the Twelve Worlds (CAP: "There Is Another Sky"). 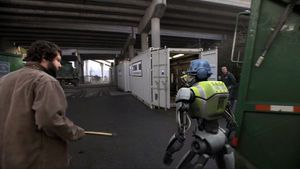 Struggling to solve technical issues plaguing the line of U-87s, Graystone Industries most profitable product - the holoband - comes under scrutiny when Graystone's daughter, Zoe is implicated as the possible perpetrator of the Soldiers of the One attack on Caprica City's MLMT train. With many citizens of Caprica blaming the holoband for society's ills, Graystone Industries begins hemorrhaging cubits. In a desperate bid to retain control of his company, Daniel Graystone declares holobands dead and presents the U-87 to the company's board of directors as the future of Graystone Industries:

"This is our future: beyond artificial intelligence, this is artificial sentience. ...It's more than a machine, this Cylon will become a tireless worker, it won't need to be paid, it won't retire or get sick, it won't have rights or objections or complaints, it will do anything and everything we ask of it without question. ...The desire to anthropomorphize, the need to connect is powerful, and that is why this thing is going to sell. We make them, we own them, they're real. And the worlds just changed."

Securing the board's (temporary) support, Graystone returns to the process of honing his U-87 prototype, but it is not for several years that the dream of Cylons as part of Colonial society is fulfilled (CAP: "There Is Another Sky"). 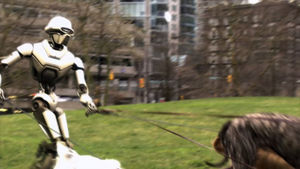 Following the event at Atlas Arena and the defeat of STO terrorists by Caprican Military Cylons, the Colonial public is galvanized. Having demonstrated the usefulness of Cylons as protectors against the monotheist threat, Graystone Industries quickly begins the design and manufacture of Cylons for use in every day Colonial society (CAP: "Apotheosis"). 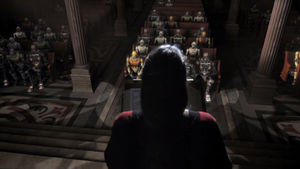 A congregation of Cylons assembles in the virtual world.

Others are less equivocal, taking to the virtual world, Sister Clarice Willow begins preaching to a flock of Cylons, speaking of their sentience: