For information on Cimtar from the Re-imagined Series, see Cimtar (RDM). 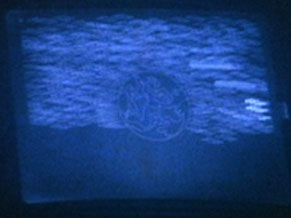 The old moon Cimtar on a Viper's scanner (TOS: "Saga of a Star World").

Cimtar is a small moon in a location considered neutral territory by both the Cylon Empire and the Colonials during the Thousand-Yahren War. It is referred to as an "old moon" by some in the Colonial military.

It is known for its fog-laden surface, which the Cylons use to great effect in hiding Raiders and the fuel tankers for their attack on the nearby battlestars. A patrol consisting of Captain Apollo and Lieutenant Zac spring this trap unsuspectingly, leading into the final decisive conflict of the war and an already prepared Galactica's ability to escape, thus enabling that last battlestar to assemble a great rag-tag, fugitive Fleet (TOS: "Saga of a Star World").

Cimtar is an "old moon" designated as a neutral meeting site to finalize the armistice.

During a recon patrol, Galactica's Capt. Apollo and Lt. Zac happen across an empty Cylon tanker in orbit of Cimtar. Interference shields a large assembly of Raiders, with only two dispatched to intercept and destroy the patrol.

While Apollo returns to his battlestar, Zac is killed short of newly-arrived battlestar fleet, beginning the Battle of Cimtar (Annihilation!).