Chronos, commanded by Admiral Tong, is a battlestar in the Colonial Fleet approximately one year prior to the Fall of the Twelve Colonies. 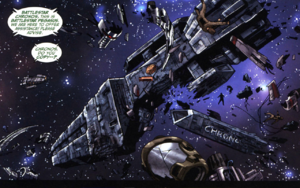 She was sent to investigate a distress signal near the Armistice Line, but did not return. Unbeknownst to the Fleet, Chronos was attacked by the Cylons, which resulted in the deaths of over 1500 of her crew. A handful of survivors, including Tong, managed to escape.

When they find Chronos, the battlestar is a wreck, all but destroyed, used by the Cylons to lure more Colonial ships in for attack. Four Raiders emerge from the wreckage and attack Pegasus with nuclear missiles, severely damaging her.

As an out-gunned Pegasus manages to determine the location of a second distress signal at a distant fuel depot, the Raiders use their nuclear missiles to obliterate the remains of Chronos (Battlestar Galactica: Pegasus).