For the contingency news blog used for news in the event of a Battlestar Wiki server outage, see The Case Orange blog. 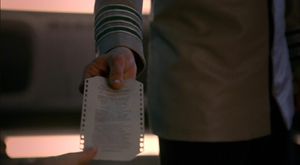 The prompt, fateful response from the Case Orange mechanism.

The Case Orange[1] automated beacon is a Colonial Government technology designed to ensure a working government in the wake of a catastrophic event.

In the latter part of the Cylons' surprise attack on the Twelve Colonies, Secretary of Education Laura Roslin speaks with a fellow official on Caprica known only as "Jack", who says that he is unsure of President Richard Adar's whereabouts during the attack, but notes that the president offered a complete unconditional surrender to the Cylons after the colony of Picon and the Colonial Fleet installations and ships located there were bombarded with nuclear bombs. The Cylons did not respond to the surrender offer. Roslin does not hear from any other government officials after her conversation with Jack is interrupted when the starliner is attacked with a Cylon missile.

Later, the transport's captain picks up an automated wireless message in the cockpit of his stranded Caprican transport, Colonial Heavy 798:

Laura Roslin sits in the cockpit with the transport's pilots and Lee Adama, their startled faces looking to her for an explanation. She tells the group that this automated message is designed to be broadcast should the President of the Twelve Colonies, the Vice President and most of the Colonial Cabinet be killed or incapacitated.

She instructs the captain of the ship to acknowledge the message by sending her government ID code (D-456-345-A) on the same frequency as the message. Roslin leaves the cockpit and awaits the return response. Presumably, the Case Orange system gathers the IDs of all government officials, then determines who becomes the new President by level of succession and where to contact him/her and any remaining officials.

Adama sits with Roslin in the passenger area and asks how far down she ranks in the government presidential succession. She replies she is 43rd in succession,[3] commenting with sadness that she personally knew all 42 individuals above her from the President on down, most having served with President Richard Adar in his past administration and when he was a mayor.

The ship's captain returns to Roslin with the printed response from the automated beacon. Out of the 42 other government officials above her, apparently only she has responded to the automated message since its activation.[4]

After the ship's captain retrieves a priest on board, Elosha, Roslin is sworn in as the new President of the Twelve Colonies[5], surrounded by reporters who accompanied her to Galactica for the tour of the education facilities of the new museum there and for the battlestar's decommissioning ceremonies, mere hours before the Cylon attack began.

U.S. President Johnson's swearing-in aboard Air Force One in 1963.

As Roslin's first act as President of the Twelve Colonies, she begins the task of locating other stranded civilian and military ships in the space surrounding Caprica. The ship's captain changes the ship's call sign to Colonial One in recognition of the presence of the new President on board (TRS: "Miniseries, Night 1").

This term finds later use as Admiral Helena Cain's codeword for Colonel Jack Fisk and his Marine detachment to initiate the removal of Commander William Adama's leadership of Galactica, and is the last known use of this term after the Fall of the Twelve Colonies (TRS: "Resurrection Ship, Part I").