Specialist Cally is a deckhand aboard battlestar Galactica assigned to Chief Galen Tyrol. At the time of the Cylon Attack on the Twelve Colonies, she is attached to Deck Crew 5. She is responsible for Viper and Raptor maintenance (Mini-Series). She is particularly adept at finding ways around the lack of replacement parts aboard Galactica, seen in her jury-rigging of several Vipers and Raptors. Cally only joined the Colonial Fleet as a means to pay for dental school (Fragged). According to Ronald D. Moore's blog, Cally's term of required service ended at the same time that Galactica was to be decomissioned, and she was about to be honorably discharged and return to civilian life when the Cylons attacked, ending those plans.

Cally is part of a Galactica team sent to the Astral Queen in order to enlist the help of convicts in ice mining operations (Bastille Day). Taken captive by the escaped immates, she is nearly raped by prisoner Mason, who shoots her after she bites his ear off in defense. Cally is returned to Galactica's sickbay for treatment, where she was given the nickname "Specialist Lazy" in jest by her comrades.

Eventually, Cally returns to duty aboard Galactica where she is selected to join a Raptor Scout team bound for Kobol (Kobol's Last Gleaming, Part I). Her Raptor is attacked upon emerging from a Jump, resulting in a crash on Kobol. As one of the few that was relatively unhurt, she is charged with caring for the injured crewmen. Cally later returns to the crash site with Chief Tyrol and Tarn, and barely makes it back alive with a medkit for Socinus (Scattered). However, it is too late to save Socinus and Tyrol administers Morpha to aid him in a painless death, which greatly saddens Cally (Valley of Darkness).

Cally seems as prone to anger after a terrible event as Chief Tyrol, but unlike him, she tends to take direct action as a result, rather than becoming immobile or overly irrational.

While stranded, Crashdown attempts to lead a hopeless attack on a Cylon Centurion anti-aircraft emplacement, and gives Cally an assuredly suicidal order to draw the Centurions' fire. Cally is so terrified at carrying out the impossible order that she freezes in place instead of advancing. Losing control and showing his imcompetence in leadership, Crashdown points a gun at Cally's head and threatens to shoot her if she does not obey. Just before Crashdown counts to three to shoot Cally, Dr. Gaius Baltar shoots him in the back, killing Crashdown instantly. The group fights a running battle with the Centurions to reach and destroy the Dradis dish supporting the Cylon gun emplacement. Seelix is shot, but Cally saves her life by carrying her further ahead. A rescue team of Raptors arrives, and Cally returns to Galactica with the survivors (Fragged).

Cally's anger transfers to Baltar when Tyrol was arrested and accused of being a Cylon himself due to his past relationship with Boomer, and threatens to reveal Baltar's part in Crashdown's death if Baltar does not act to clear Tyrol's name. Cally later shoots and kills the Galactica copy of Sharon Valerii because she is outraged that Chief Tyrol was thrown in the brig and was wrongly suspected of being a Cylon because of her (Resistance). Cally is imprisoned in the brig. At Tyrol's request, Commander Adama gives Cally a lenient sentence of 30 days for "discharging a firearm without permission" (The Farm). 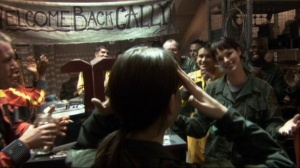 After her 30 day sentence is finished, Cally is released from the brig, and a welcome back party is thrown for her on the hangar deck by the deck crew. Chief Tyrol was still upset with her for killing Boomer, though Cally is grateful to the Chief for putting in a good word for her with Adama. She aids Tyrol in the construction of the Blackbird. By the time they finish construction, he reconciles with her (Flight of the Phoenix).

Along with the rest of the crew, Cally is jubilant when the long-thought destroyed battlestar Pegasus finds Galactica. However, she is disgusted when several drunken Pegasus crewmen brag about repeatedly raping the captured Cylon agent known as Gina, probably because she herself survived an attempted rape. Chief Tyrol and Lt. Karl "Helo" Agathon are arrested and taken aboard Pegasus for causing the accidental death of Pegasus' Lt. Thorne after they stop him from raping the incarcerated but cooperative Caprica copy of Sharon Valerii. Cally pleads with Commander Adama to do something about the incident when Adama learns that Admiral Helena Cain intends to execute Tyrol and Helo. Adama dismisses her with quiet purpose ("You have work to do") as he prepares the battlestar to engage the militant admiral's command with his older Viper squadrons (Pegasus).