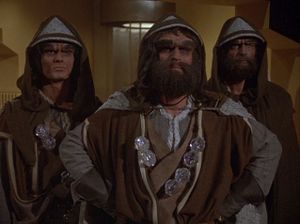 The Borellians (misspelled as "Borallians") are described as a "fierce, nomadic people whose cruel tribal customs have survived into the Interstellar Age". What is known of them to the rest of humanity is "limited to their military customs", as the Nomen have no clear distinctions between "wars, feuds and criminal punishments".
Nomen have social organization based on kinship, thus making feuds into wars.
As to contact with non-Nomen: any crimes committed by outsiders result in the blood hunt, consisting of a group of Borallian [sic] Warriors that swear to pursue the criminal wherever they may go. As stated, "Death is the only sanction meted out by blood-hunting parties." The "Borallian [sic] Wars" are said to be direct extensions of blood hunts, making the criminal the enemy of the entire people. Both types of hunts may lead to Borallian [sic] Warriors dying for the fulfillment of their oaths.
The Borallian [sic] Warrior's ethic was centered around a long knife; this knife meant certain death for outsiders who seen one unsheathed, since a Nomen would prefer suicide to seeing the knife sheathed unbloodied. This tradition, which "stems from a respect for naked violence and a belief that it is not to be employed or threatened lightly", made way to the laser bola (erroneously referred to as the "Laser-Bolt").[2]