Laura Roslin is an unmarried[1] woman with some 20 years of political experience. She serves as Secretary of Education for the Colonial Government at the time of the Cylon attack, later becoming president of the Twelve Colonies after the Cylon attack.

Roslin, a former teacher, worked with Richard Adar when he was a mayor. Over the years, she herself has risen in political rank to the office of Secretary of Education. Adar and Roslin are in a sexual affair[2] during the events of a teachers strike that she is trying to mediate, to Adar's objection. Roslin learns earily that she, as did her mother, has breast cancer. Unfortunately, the diagnosis is grim, as the cancer has already spread.

She attends as the government representative for the decommissioning ceremonies on battlestar Galactica. On her return on Colonial Heavy 798, the Cylon attack begins, leaving billions dead and thousands of lives stranded in space and in need of a leader.

Despite being thrust into the role of President in highly unusual and stressful circumstances, Laura Roslin initially proves herself both tough and capable within the role. Initially in awe of Commander Adama, and worrying that he didn't hold her in high regard, she quickly overcomes her doubts and fears to be able to make the required decisions at the right time, and also stand up to Adama himself (You Can't Go Home Again). She is always prepared to put the safety and destiny of the Fleet first, no matter what the cost of her actions ("Flesh and Bone," "Home, Part I," "Home, Part II," "Lay Down Your Burdens, Part II") while remembering her limitations and fears.

As her first duties as the new president, Roslin undertakes a rescue mission to round-up any vessels in Caprican space that escaped destruction. Later on Galactica, Roslin successfully persuades Galactica commander William Adama away from his original intention of mounting a counter-attack against the Cylons, and towards helping the new civilian fleet escape from the Cylons.

Since the exodus, Roslin establishes a fledgling civilian government within the Fleet, agrees to abide by civil law regarding her interim term of office, and reestabishes a new Quorum of Twelve. Roslin and Commander Adama begin their leadership together under an uneasy understanding. Where she is responsible for all civil leadership issues among the surviving Colonials, Adama is responsible for all military decisions (Miniseries). However, the dividing line is not always clear between the two leaders, initially.

While using chamalla extract as an alternative to diloxin for cancer treatment, Roslin experiences visions of Kobol and recalls them to priest Elosha, who recognizes them as those prophesized by Pythia, where a dying leader will find the path to Earth. After research, she determines that she may be able to substantiate Commander Adama's fictitious knowledge of the location of Earth with a true bearing to the world using ancient Colonial history.

Roslin's actions to retrieve an ancient artifact leads Commander Adama to stage a coup. Complicating her arrest, Adama is shot by a Cylon agent. During her incarceration, Roslin eventually gets support in her quest from the Quorum of Twelve and underground civilian support. After escaping Galactica's brig, she escapes with a large group of civilian ships that join her in the search for the Tomb of Athena.

The recovered Commander Adama gains refreshed insight on the need for the Fleet to stay united, finds Roslin's expedition on the surface of Kobol, and begins mending fences. He tells Roslin that her decision was leave the Colonies was correct. If he had chosen to stay, Adama, his son, and all of humanity would be dead. Earlier the excursion, Elosha is killed. Roslin takes Elosha's blood-spattered copy of the Sacred Scrolls to guide her and to remember her friend.

With some teamwork, Roslin's team discover the Tomb of Athena and activate the Tomb's virtual hologram mechanism. Roslin's gamble on faith pays off big for humanity, and the group gains a map and guide to the true location of Earth. Back on Galactica, Commander Adama introduces Roslin as President during a speech on the ship, and leads the audience in a rousing ovation on her return, publicly burying the hatchet between them.

Since Kobol, Adama and Roslin's respect for each other grew stronger and their leadership in managing fleet business became more cooperative, asking each other for advice and correcting each other as needed. With the news of her illness now common knowledge, the military crew honors Roslin by christening a new experimental stealth fighter by the name, Laura, a gesture that brings tears to the President.

Despite the pleasure of the arrival of battlestar Pegasus, Roslin becomes concerned about Cain's abrupt command style and refusal to supply the civilian fleet. After a near-disastrous military confrontation between the two battlestar commanders, Roslin forces them to work on more important matters. Privately, Roslin tells Adama that Cain must be eliminated for the Fleet's survival. 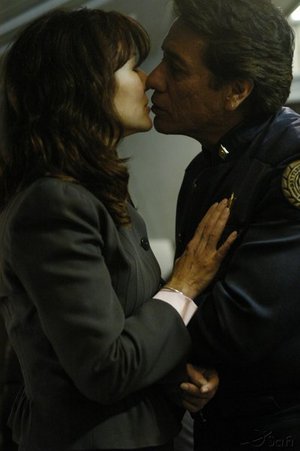 After an important Cylon battle and Admiral Cain's death, Roslin, now more frail with her illness, promotes William Adama to Admiral. By surprise, the new admiral gives the president a kiss, establishing a more personal aspect to their friendship.

Roslin is miraculously saved by the injection of stem cells[3] from the Cylon hybrid fetus, which apparently eradicates her cancer (Epiphanies). In the hours prior to the cure, however, Roslin remembers her last days on Caprica, including an attractive blonde with Dr. Baltar, her vice-president. She now recognizes the blonde as a copy of a Humanoid Cylon and realizes Baltar's probable treachery prior to the Colonies' destruction. Later, she confronts Baltar on his association and confesses the memory to William Adama.

Roslin returns to work with a dispassionate, zealous manner not unlike her predecessor, Richard Adar. Roslin appoints a new aide, Tory Foster, who is an energetic young woman with a great deal of political drive, replacing Billy Keikeya.

Complicating what may have been an easy re-election, Roslin has to fend off controversy on abortion issues while her own vice-president, Dr. Baltar, becomes her rival in the elections. Unknown to anyone else, Roslin, convinced that that the only way to keep the newborn Cylon-hybrid, Hera Agathon, alive but out of the eye of Humanoid Cylons, has the infant's death faked and hides the child.

With the discovery of a habitable planet dubbed "New Caprica", Baltar successfully wedges colonization against Roslin's campaign. Although she attempts to rig the campaign, Admiral Adama discovers the plot and intervenes. He tells Roslin that the people have made the wrong decision to elect Baltar as president, probably even a disastrous choice, but it was their choice.

Early in the colonization, Roslin finds time to relax on New Caprica. She meets with Admiral Adama, who also takes in some time to unwind. The two friends comfortably chat about matters small and not-so-small over smoking and drinking, and later gaze at the stars together, allowing themselves to relax, lying outside, close to each other. 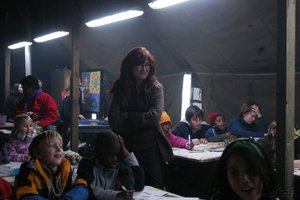 A year passes on New Caprica, and Baltar's administration becomes the unmitigated, incompetent disaster that Roslin had feared. As Roslin teaches in the new settlement's schoolm the Cylons discover the colony, as Roslin had feared, and occupy the settlement (Lay Down Your Burdens, Part II).

Roslin is continually viewed as a resistance leader, and is persecuted and eventually taken to be executed, but is rescued along with Tom Zarek, the former vice-president under Baltar. Roslin's relationship with Zarek changes again, this time with Zarek realizing Roslin's strengths, and she of his strengths in turn.

Roslin leaves evacuates the planet aboard Colonial One during the Second Exodus, and eventually returns to the presidency after new ally President Zarek cedes the office to beccome her new vice-president, but not before he attempts to rid the Fleet of the Cylon conspirators through draconian means. She issues a general pardon to everyone in the Fleet to prevent the Fleet from being torn apart by long trials (Collaborators).

Roslin and Adama work well together in managing Fleet morale in the months leaving New Caprica, analyzing new data that helps guide the Fleet on the way to Earth and handling a serious food shortage. Roslin's relationship with Adama is strained when he discovers that Roslin hid the Cylon baby, Hera Agathon, without his knowledge. She is forced to face up to her actions when Karl Agathon confronts her after he and his wife attempt an unauthorized rescue of their child, now in Cylon hands.

After Gaius Baltar is captured, Roslin's desire for answers about his involvement with the Cylons "infects" several others, including Tigh and Admiral Adama. They are unsuccessful in getting any answers, but generate more questions as to why Baltar thinks he may be a Cylon himself. Roslin organizes a tribunal for Baltar and his trial, recruiting Lee Adama to assist. Admiral Adama and Roslin continue to talk about their feelings about each other, but, always aware of their responsibilities to the Fleet, have not explored their feelings further.