Tom Zarek was a political activist for more than 30 years before the Fall of the Twelve Colonies. He is a charismatic, eloquent and ideological political agitator who was incarcerated for destroying a government building on Sagittaron. His 20-year incarceration culminated in a sojourn on the Astral Queen, an FTL-capable prison ship, whilst in transit to parole hearings. Assigned the prison number of 893893, Zarek is under consideration for parole at the time of the Cylon attack.

As the Cylons attack the Twelve Colonies, Zarek is on a prison barge called the Astral Queen. Zarek manages to secure the release of the prisoners, and is put in command of the Astral Queen. Zarek engages in a steady effort to gain the goodwill of others of influence within the fleet, resulting in his nomination as Sagittaron's representative on the Quorum of Twelve. Zarek makes a bid for the position of vice president, ultimately losing out to Gaius Baltar. Zarek eventually becomes Baltar's vice president, then president after the exodus of New Caprica. He then brokers a deal with Laura Roslin, allowing her to assume the presidency and being appointed her vice president. ...continued...

Five days after the Fleet's escape from Ragnar, Specialist Socinus and other crew are gathering a record of surviving colonists for the new Colonial government, but cannot upload photos to the database (or possibly to other ships) at that moment. When Anastasia Dualla offers her photos to Socinus, he suggests to leave the photo with his group or to place it outside in one of Galactica's hallways. Opting for the latter, Dualla encounters hundreds of photos, newspaper clippings, drawings, and other mementos of loved ones presumed lost or missing in the new Cylon war (33). ...continued...

Kara Thrace's old apartment on Caprica in the city of Delphi is filled with paintings on canvas as well as some wall paintings (Valley of Darkness).

In the wall to the left of a curious circular painting that Thrace has doodled since she was a child ("The Eye of Jupiter", "Maelstrom"), the Viper pilot wrote a simple poem that may be about Zak Adama, a former lover she is responsible for getting killed. ...continued...

Norman Blore[2] and his wife Shirley are driving to a Halloween party where Wolfman Jack is in attendance. Norman is dressed as a clown, although he is far from jovial.

During the awkward car ride, Norman reveals his hatred of Arnie's meatballs, Vida Blue's appointment to the San Francisco Giants and a negative view of Arnie's sister, Mildred, whom he describes as so "romantically malnourished" that "she once proposed to a mugger in Central Park". The only reason he attends the party is due to his belief that Arnie is the best music director in radio. ...continued... 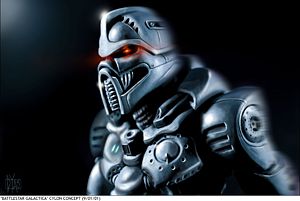