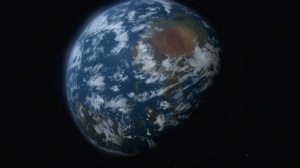 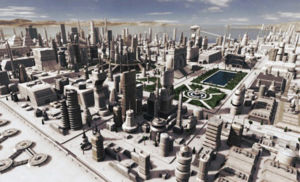 The tribes settle on 12 worlds some distance away (Kobol's Last Gleaming, Part I). The tribe's namesakes and icons originally corresponded to the twelve signs of the ancient tribes, although these names drifted over time[3] (Home, Part II).

The early Colonies lived (and fought) more as sovereign nations. Some (particarly Caprica) prospered, while others (such as Sagittaron and Aerelon) were often considered lessers. For peacetime labor forces as well as for wars between each other, humanity created the Cylons. When these early models rebelled, the Colonies unified their governments under the Articles of Colonization sometime before or during the Cylon War as a federal republic known as the Twelve Colonies of Kobol[4].

The official symbol of the Twelve Colonies is the Colonial seal. ...continued...