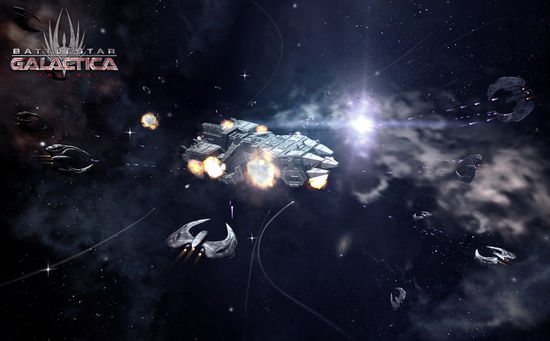 Battlestar Galactica Online is a massively multiplayer online (MMO) game developed by Bigpoint and Artplant. The game was released on February 15, 2011. The official website is us.battlestar-galactica.bigpoint.com. The browser based game uses 3D graphics which were developed using the Unity Game Development Tool. Bigpoint claims Battlestar Galactica Online is one of the best projects they have had as far as technology.

The publisher, Bigpoint, released this brief description about this game before the release: Players will be able to choose to play as Cylons or humans in a constant struggle to control the universe or just survive its perils. A blend of tactical space combat, exploration, and mission-based gameplay will provide a diverse experience. The dramatic missions will define the game's overall storyline, enabling the player to delve into mysteries of the Battlestar universe. Battlestar Galactica Online will create a new standard for web games, with beautiful 3d graphics and innovative game mechanics bringing a new level of game play to browser based MMOG. Assets from the television production will be integrated into the game to deliver an even more authentic experience.

How The Game Starts

Based on the new Battlestar Galactica tv show, the game begins 40 years after the first Cylon war. The players begin the game as either a Cylon or a Colonial, stranded at the edge of one of the galactic arms. Both Colonial fleets (Battlestar Galactica and Pegasus) are heavily damaged and low on critical resources. The race begins for the Colonials to repair and rearm their ships, escape and continue their quest for Earth before the Cylons gain enough strength to obliterate them once and for all.

Main Characters in the game

Admiral Adama: He is the admiral and commanding officer of the Battlestar Galactica. He is an experienced and practical leader who feels as if his crew is his family..

Lee Adama ‘Apollo’: The son of Admiral Adama, Apollo has strong moral fiber and is a rational pilot.

Kara Thrace ‘Starbuck’: She is rebellious, passionate and the fleet’s most talented Viper pilot.

One 'Cavil': John Cavil is a sarcastic and humorous Cylon. Cavils have a heightened sense of awareness.

Eight – Sharon 'Boomer' Valeri': Number Eight is a sleeper agent humanoid Cylon. Eights are programmed to believe they are human and are issued fake memories.

Six: Number Six is a sexy and seductive replica of a human being. Six uses her looks to get what she wants. Caprica Six seduced Baltar, enabling the Cylons to destroy the 12 colonies.

Colonial Ships in the game

Colonial Viper: The Colonial ship most capable of matching the speed, agility and firepower of the Cylon raider. A recent addition to the Viper is the rigging of a small FTL drive for long-range operations.

Colonial Raptor: The Raptor can be outfitted with a variety of missiles for both offensive and defensive assignments. As a Command ship, the raptor can be stocked with more computer systems than other Strike Craft. This greatly enhances its electronic warfare and support capabilities.

Rhino: The highly armored and rugged strike craft, that have been recently discovered by the fleet. The resurrection of the strike craft requires a considerable investment of resources and time. The attributes of the ship are highly valued, making the investment worthwhile. The Rhino can be equipped with more armor and hull systems than others, adding additional defensive capabilities.

Scythe: This small and maneuverable craft is the smallest of the three classes of abandoned escorts brought back to life by Galactica ground crews. Its tylium reactors and drive assembly take up over 50% of the ship’s hull, resulting in an above average thrust to mass ratio and rapid response time to incoming attacks and offensive opportunities. The Scythe’s engine systems can receive upgrades, improving its already great performance.

Maul: This well-built craft is the largest of the abandoned escorts. The Maul is heavily armored and is ideal for guard duties. The Maul can take on the most hull systems of any escort, increasing its toughness as an Assault ship.

Aesir: The Aesir features high output reactors and drive assemblies which can produce massive thrust considering the small size of the ship. As a Heavy Interceptor, the Aesir’s engines can be upgraded to produce imposing performance.

Vanir: The twin-hulled Vanir integrates several senor and emitter grids in a configuration that can be very powerful and effective. As a Heavy Command vessel, the Vanir can be equipped with a several computer systems than other line ships, increasing its electronic warfare and support capabilities

Jotunn: Jotunn which has established itself as a “baby battlestar” is the largest abandoned ship class that the Colonial Fleet has so far managed to recover. The Jotunn's has heavy-duty construction and capability to advance under the most brutal fire. As a Heavy Assault vessel, the Jotunn can be equipped with more hull systems than other line ships, increasing its toughness and defensive capabilities many-fold.

Cylon Ships in the game

Cylon Raider: The Raider is the primary Interceptor of the Cylon fleet, designed to be sleek and deadly, it used speed and agility to perform quick strikes and chase down slower, less maneuverable targets. It is a biomechanical construct commanded by a 'pilot mind' that literally mends with the ship. As an Interceptor, the Raider can be equipped with more engine systems than other strike craft, increasing its already imposing performance.

Cylon Heavy Raider: A support and communications craft capable of processing vast quantities of tactical data and disrupting enemy systems with combinations of viral attack and jamming, the Heavy Raider's oversized hull can also transport several Centurions or humanoid Cylons. As a Command ship, the Heavy Raider can be equipped with more computer systems than other strike craft, increasing its electronic warfare and support capabilities.

Marauder: A heavy strike craft hull recovered from the base of the mysterious Cylons who abandoned this sector at some point in the past. Although some delicate reconfiguration is required for full compatibility, the Marauder's high density hull materials provide far greater protection than standard Cylon strike craft. As an Assault ship, the Marauder can be equipped with more hull systems than other strike craft, further increasing its toughness and defensive capabilities.

Banshee: The Banshee is the first of three abandoned escort designs that the Cylon fleet has recovered and returned to active status. The Banshee is a fast attack ship built for quickness and maneuverability. As an Interceptor, the Banshee can be equipped with more engine systems than other escorts, increasing its already impressive performance.

Spectre: Only a small number of Spectre escort hulls have been recovered by the Cylon Fleet, and bringing them back into active service requires complex recoding and interface configuration to make full use of their advanced processing and emitter nexuses. The result, however, is a powerful electronic warfare and support platform. As a Command ship, the Spectre can be equipped with more computer systems than other escorts, increasing its electronic warfare and support capabilities.

Wraith: The Wraiths hulls are both angular and bulky and were probably an experiment based on human designs. High density, ultra thick hull plating and structural support make it extremely effective in close combat. As an Assault ship, the Wraith can be equipped with more hull systems than other escorts, further increasing its toughness and defensive capabilities.

Fenrir: The Fenrir is super quick and has a hull that has been proven to be among the most complex and advanced designs left behind by the Cylons. Returning them to active service requires a massive investment of time and resources, but the Fenrir's combination of speed and firepower should prove worth it. As a Heavy Interceptor, the Fenrir can be equipped with more engine systems than other line ships, increasing its already impressive performance.

Hel: Intended as a battlefield command and control platform, the recovered Hel class hulls are honeycombed with data processing, sensor and emitter plexuses that rival the capabilities of a Basestar hybrid. As a Heavy Command vessel, the Hel can be equipped with more computer systems than other line ships, increasing its electronic warfare and support capabilities.

Jormung: The largest abandoned ship class so far recovered by the Cylon Fleet, the Jormung's massive wedge-shaped hull is thickly armored and heavy braced, offering superior protection from enemy fire and allowing the ship to act as a mobile fortress on both offensive and defensive operations. As a heavy assault vessel, the Jormung can be equipped with more hull systems than other line ships, further increasing its toughness and defensive capabilities.

Bigpoint at E3 2010 had a booth just for Battlestar Galactica Online. Below are a few quotes from numerous media websites that reviewed the game on what they actually got to play at the E3 Expo event.
IGN: