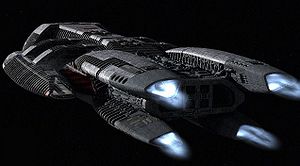 Battlestars are a heavy class of human-controlled Colonial warship, that combine the functions of aircraft carrier and battle cruiser.

All the original battlestar vessels deliberately avoided the use of highly-integrated or networked computer systems, as the Cylons were able to infiltrate and subvert such systems, disabling Colonial defensive capabilities (Mini-Series).

Following the end of the war, the battlestars remained in service, and their numbers increased. However, later vessels did include networked systems (Mini-Series), and while the term "battlestar" was used to describe these newer vessels, it is unclear as to whether they were the same overall size and form as the original battlestars. Several of the original 12 vessels were also upgraded (Mini-Series), with the exception of the battlestar Galactica, which retained its original command and control systems at the insistence of Commander William Adama

Possibly as a result of her "original" condition, the Galactica was selected to become a living museum / educational centre once decommissioned (Mini-Series). Following the surprise attack by the Cylons on the Colonials, the Galactica was left as the only battlestar capable of mounting a counter-offensive, although she was initially hampered by the lack of any defensive munitions on-board.

Battlestars are space-going leviathans. Some 4,500ft in length (Zoic), they combine the role of a modern airacraft carrier with that of a battle cruiser. Housing some 140-180 "Viper" space superiority fighters arranged in 6-8 squadrons of 20 apiece, and with 20 reserve aircraft (fan estimate), a fully-armed battlestar is capable of a wide range of offensive actions, while her defensive armaments ensure she is fully capable of both protecting herself from attack, and of engaging an enemy at close quarters.

Despite their massive size, battlestars are extremely manoeuvrable (Mini-Series - docking at Ragnar Anchorage) and, in the right circumstances, partially atmosphere-capable (Mini-Series - docking at Ragnar Anchorage). Their FTL systems are capable of incredibly-accurate jumps, able to place them precisely in synchronous orbit above an point on a planet (Mini-Series)and of placing them in the midst of debris fields, such as an asteroid belt, without risk of a devastating impact (The Hand of God).

Battlestars are intended to operate for long periods without resupply - their water purification capabilities alone mean that, barring an emergency or unforeseen event, they don't need to re-tank with water for several years (Water). They also appear capable of undertaking large-scale repairs following battle damage (Mini-Series), and may well have manufacturing / fabrication facilities on-board (Litmus).

(The following are fan estimates) 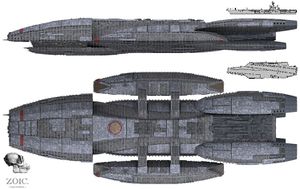 The original battlestar design common to Galactica and her sister ships can be broken down into two main sections:

This comprises the bulk of a battlestar, and can itself be divided into three sections:

The main hull houses all of a battlestar's offensive railguns, and also has a number of point-defence batteries mounted around it.

The manoeuvring thruster packs are located in the port / starboard bows of the "alligator head" (4 thrusters apiece), and on the poert / starboard extremities of the four sublight engine nacelles (2 "packs" of 4 thrusters per nacelles).

These are mounted on either side of the hull and contain a battlestar's offensive Viper force. During normal operations, they are extended away from the main hull. During FTL jumps, the pods are retracted against the hull, to provide a smaller cross-section for the battlestar during the jump itself.

In the original series, battlestars were the direct response to the on-going war with the Cylons. The first battlestars were introduced into Colonial forces around 500 yahren into the war, and proved formidable when placed against the technically-superior Cylon basestars, although at least two battlestars were totally destroyed during significant battles, and a third, the Pegasus, was believed to have been destroyed at the Battle of Molecay.

The length and beam figures given here are based on research carried out by Todd Boyce, a computer animator. There are many differing claims to the actual size of the original battlestars, ranging from some 2,000 (accepted length in a number of gaming systems) through to 2-3 miles in overall length.

Interviews with Glen A. Larson and John Dykstra, the Visual Effects supervisor for the original series stated that the original Galactica was around a mile long. If the scale of the master model used for filming was set at 1/960, then the overall length of the Galactica and her sister ships would be some 6,080ft - or one nautical mile. However, there is no confirmation available that 1/960 (1 inch = 80ft) was in fact the scale of the model, and the figures have thus been "back engineered" to fit the case.

In undertaking his work, Boyce utilised an established baseline for his calculations: the full-size mock-up of a Viper built for filming purposes. This mock-up measured some 28.5ft in length and a wingspan of some 12.5ft, and formed a means by which Boyce could take key shots from various episodes, combine them with a scale model of the Galactica and extrapolate a reasonably-consistent set of measurements. Thus: using film footage alone, Boyce was able to determine the length of the Galactica to be some 4,143ft, while use of a scale model produced a figure of some 4,166ft: an acceptable difference of some 23ft. What is more, these measurements appear consistent with the overall size of the Viper launch tubes (calculated at some 16ft in diameter, based on the wingspan of the full-size mock-up and images of Vipers being launched).

Given this degree of similarity in final calculations, these figures have been adopted here as the probable dimensions of the original series battlestars. However, in using these figures, it should be noted that:

Myth of the Twelve Battlestars

Within fan circles, it has always been assumed there were twelve battlestars. Given there are Twelve Colonies, and a Quorum of Twelve, twelve battlestars was perhaps seen as a logical extension of the motif of twelve. However, Glen A. Larson has stated that there was never any decision to have a specific number of battlestars, nor did the original series ever mention there only being twelve battlestars; indeed, only eight battlestars were specifically mentioned within the series. Given the length of the human / Cylon war, it seems only logical that overall, far more than twelve of these warships were constructed.

The eight battlestars specifically mentioned in the original series are:

The Costume Department at New West has indicated that three further battlestars may have been referenced had the show been renewed: the Solaria, Cerberus and Prometheus.