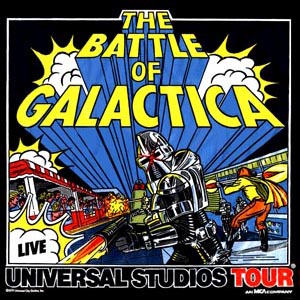 Battle of Galactica was a theme park ride at Universal Studios Hollywood. It debuted on June 9, 1979 and was popular enough that it lasted until 1992. The ride lasted only 2 minutes and 45 seconds. 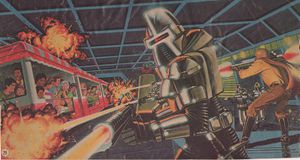 Promotional art used in a program guide for Universal Studios.

The ride begins with a bewildered tour guide happening across a huge space ship blocking the road. Off to the driver's left, the tour comes across a tank manned by two Cylon Centurions.

The Cylon driver of the tank instructs the driver to halt: "Halt, foolish humans, you have blundered into a Cylon battle zone. You are now our prisoners. Do not attempt to escape. Move forward immediately or we will blast you!"

When the driver objects, the gunner of the tank fires a warning shot across the bow of the tram at a nearby rock. The Centurion driver instructs the tram to "Move!"

The door of the spaceship opens, allowing the tram to enter while the tour guide comments on their predicament.

Entering into the command center of the battle cruiser, a Centurion presents the prisoners to Imperious Leader, informing them that "strange looking Earth creatures" have been captured while "attempting a sneak attack on our battleship." The Centurion further notes that, "Their general is called Tour Guide."

The Tour Guide objects, but is silenced by Imperious Leader: "Silence foolish mortals, your fate is sealed." He asks a Centurion his standing order, to which the Centurion replies "the total extermination of the life form known as man." Imperious Leader notes that the humans would make good morsels for their Ovion allies. Imperious Leader instructs his Centurions to prepare for departure, fearing further sneak attacks by humans.

However, this is thwarted by a lone Colonial Warrior, who arrives on behalf of the Twelve Colonies of Man and begins firing at Cylons. During the fight, the Warrior blasts another large door open and tells the humans to escape: "Get out of here! I'll be all right!"

The not-General Tour Guide continues their narration following their escape: "Ladies and Gentlemen, we have just survived the Battle of Galactica, inspired by the television series, Battlestar Galactica." [1]

Constructed upon the site of the short-lived "Rockslide" attraction, Battle of Galactica was conceived as a response to the massive initial success of Battlestar Galactica. As prelude to the ride, Cylon Centurions and Colonial Warriors would mingle amongst the Universal Studios Hollywood guests beginning in 1978, as members of the "Streetmosphere."[2]

The ride debuted on June 9, 1979 and lasted until 1992, where it was demolished and replaced with the foundations of the Back to the Future ride, until that too became replaced by The Simpsons building.

Various pieces of concept art were commissioned to assist the developers envision and execute upon the vision of the attraction.

Back of an unused concert ticket for The Beach Boys, circa 4 June 1979, featuring a monochromatic print ad and depiction for the attraction.

Leading up to the debut of the ride, a series of commercials featuring Cylon Centurions, an Imperious Leader (voiced by Lennie Weinrib), and even one alien depicted from "Saga of a Star World"'s Carillon chancery were aired. (See: "Related Videos".)

In addition, promotion for the attraction was executed via print media, including the back side of movie ticket stubs issued by the Universal Amphitheatre.

For print media, press kits on the attraction were prepared and released to the public. (See: "Press Kits".)

The magazine Starlog ran an article on the attraction in 1979.

Promotion for the attraction continued into the 1980s with newsprint advertisements, as well as clips from the actual ride interspersed in commercials promoting the Universal Studios Tour.

The following items were made available via press kits issued by Jim Goyjer, consisting of photographs for reproduction in newspapers and other newsprint media, in addition to corresponding descriptions.

Various promotional collateral were also created for use in other non-newsworthy venues, including park welcome kits, envelopes, and other miscellany.

A variety of merchandise was made available relating to the ride, including t-shirts, postcards, View-Master slides and even pens. Such offerings are documented in the link above.

The following are photos of a fairly preserved Cylon Centurion animatronic from the attraction, as presented in the 2014 exhibit celebrating the 50th anniversary of the Universal Studios Tour. It was presented alongside the U-87 practical stand-in built for Caprica.

Video presentation of the ride itself.

Appearances in Other Venues

As part of Universal Studios Tour, the Battle of Galactica experience was featured in movies and television during its nearly 13 years of operation, including the 1980 movie The Nude Bomb, the comedy film based from the television series Get Smart starring Don Adams as Maxwell Smart.

In 1988, the "Robot Man" music video segment from Young Talent Time at Universal Studios featuring Courtney Compagnino is shot on the Battle of Galactica set.