Aurora, Goddess of the Dawn

For other uses of the name, see Aurora. 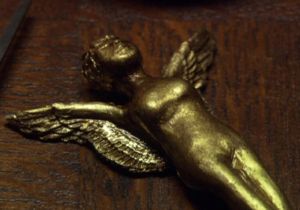 A figurine of Aurora.

Aurora is the goddess of the dawn, and possibly one of the Lords of Kobol.

When Kara Thrace visits the oracle Brenn in Dogsville, she touches a small winged icon of the goddess, which is then given to her by the oracle.

Thrace later gives the icon to Admiral William Adama as a figurehead to place on the bow of the model sailing ship he is building (TRS: "Maelstrom").

After Thrace's mysterious return, she is given command of the Demetrius to search for Earth and Adama gives her the figurine back. She keeps it on the table in her cabin and plays with it when she is frustrated about the lack of success (TRS: "Six of One", "The Ties That Bind"). [1]

According to the book of Pythia, a temple dedicated to Aurora exists on Earth, built by the Thirteenth Tribe. When the Fleet arrives there, they find a ruined city with the remains of this structure (TRS: "Revelations").

In the Separate Continuity

Aurora is one of the Messengers who help lead the surviving members of the Thirteenth Tribe—Kobollian "Cylons"—in their exodus from Kobol to Earth (Battlestar Galactica: The Final Five #4).

In addition to arranging the publication of the Book of Pythia, Aurora assumes the form of the deceased Pythia, and not only allows the Thirteenth Tribe the ability to biologically reproduce, but is the mother of one of the Final Five: Saul Tigh (Battlestar Galactica: The Final Five #3).