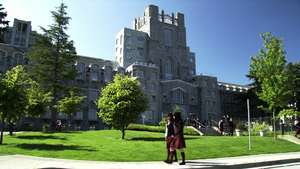 Frontage of the Athena Academy circa 42YR (CAP: "Pilot").