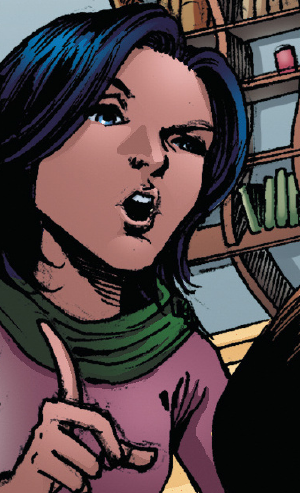 During the battle of Umbra in 7322, Athena and Apollo are ferried with their pregnant mother, Ila, to battlestar Rylon — where Captain Adama is stationed (Battlestar Galactica: Starbuck #1).

In 7328, living in relative luxury in Caprica, Athena pursues a career in the Warrior with the aim of outranking her brother, Apollo. During this time, they encounter Starbuck who re-enters Adama's life when asking for sponsorship of his application to the Colonial military academy. Despite a rough start, Apollo and Starbuck become friends, and Starbuck becomes smitten with Athena (Battlestar Galactica: Starbuck #1).

Entering the Academy, Athena becomes proficient in computer technology, and is assigned to Galactica under her father's command in 7346. After Starbuck is framed for the death of Kandi Trieste by Councilor Osiris's daughter and aide, Diana, Athena uncovers footage from Erin Dream's casino that would have proven Starbuck's innocence. Diana subsequently thwarts and captures Athena (aware of Athena's abilities, for she was enrolled at the Academy during the same time period that Athena had been), and absconds with her to the ice moon of Thrace to be held as collateral to prevent Adama from acting against her father's interests (Battlestar Galactica: Starbuck #3—#4).

Athena frees herself from her cell on the old tylium mine, sparring with Diana and nearly killing her, were it not for Apollo's intervention and their subsequent escape from the mine before its destruction by its own overloading reactor (Battlestar Galactica: Starbuck #4).

Athena helps uncover the fact that Xam is responsible for not only the dreams of Earth affecting a great many of the Fleet's denizens but also the phantom "artifact" that is "discovered" in the storm zone (Classic Battlestar Galactica Vol. 2 #8—#9).