Arts and Entertainment of the Twelve Colonies (TOS)

Arts and Entertainment help the last known survivors of the Twelve Colonies to rest, relax, and try to forget the fact that their race was nearly wiped out and they are still being pursued by robots intent on their destruction. 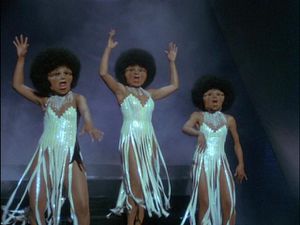 The Tucana singers perform (Saga of a Star World).

The Colonials appear to have an appreciation for singing. The Tucana singers on Carillon perform for the Colonial patrons, and Starbuck judges their talent to be exceptional (and potentially very lucrative) (Saga of a Star World).

Games of chance are popular. The most common amongst the pilots is Pyramid, a card game. At the chancery on Carillon there appear to be a variety of games, with the odds stacked heavily in favor of the patrons in order to get them to stay for dinner.