Difference between revisions of "Arrow of Apollo" 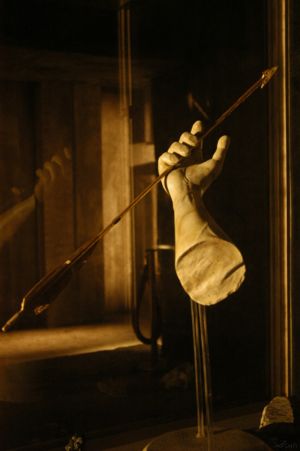 The Arrow of Apollo is a symbolic great hunting arrow and a symbol of Apollo, Lord of Kobol. The Arrow, as it turns out, is also a key.

Legend states that the Arrow is the one surviving clue to location of the planet Earth (TRS: "Kobol's Last Gleaming, Part II"). According to accounts of the scriptures of Pythia and Laura Roslin's statement to the Quorum of Twelve, the arrow is a key of sorts, which will open the Tomb of Athena (TRS: "Fragged").

This arrow itself was on display in the Delphi Museum of the Colonies in the City of Delphi on Caprica (TRS: "Kobol's Last Gleaming, Part II").

While the city itself suffered extensive damage as a result of bombing during the Cylon attack, the Arrow survived undamaged in the ruins of the museum. It becomes the focal point of Laura Roslin's attempts to discover the whereabouts of Earth following the apparently accidental discovery of Kobol by the Fleet (TRS: "Kobol's Last Gleaming, Part I"). The quest for the Arrows leads Lieutenant Kara Thrace to disobey orders, taking a captured Cylon Raider to Caprica to retrieve the Arrow. 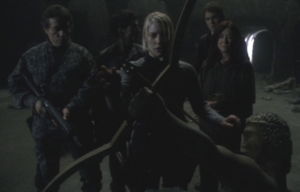 The Arrow is guarded at the museum by a copy of Number Six until collected by Thrace and eventually taken to the Astral Queen and fugitive President Roslin (TRS: "Home, Part I").

The Arrow did not in fact open the Tomb of Athena, as stated in the scriptures, but activated a planetarium inside when placed in the bow of the statue of Sagittaron within it. It is not indicated whether the Arrow was recovered from the Tomb after its use.

In the Original Series two-part episode,"Lost Planet of the Gods," Commander Adama wears a medallion that he uses as a key to enter the tomb of the Ninth Lord of Kobol. As with the users of the Arrow of Apollo in the later series, the original Adama and his Galactica also searched for information on the whereabouts of Earth. Unfortunately, his team is interrupted by Cylon attacks and is forced to abandon the quest.