Difference between revisions of "Arnie's meatballs" 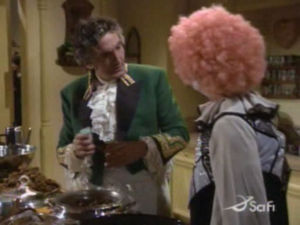 Arnie's meatballs are an Earth culinary delicacy of ill-repute.

According to Norman, an oracle of humorously grave disposition, he reproached these "meatballs" as obstructing the digestive tracts of humans: in front of two Cylons, no less (1980: "The Night the Cylons Landed, Part I").

These meatballs are the labor of love of a human named Arnie, taking an hour and a half to prepare properly (1980: "The Night the Cylons Landed, Part II"). They are then typically shoved down the throats of unsuspecting victims during festivities, such as Halloween.

The personification of these meatballs is a human baseball player named Vida Blue, who exerts a similar influence during his time with the San Francisco Giants baseball team in the 1980s (1980: "The Night the Cylons Landed, Part I").