"The Cylons were created by Man. They were created to make life easier on the twelve colonies. And then the day came when the Cylons decided to kill their masters. After a long and bloody struggle, an armistice was declared. The Cylons left for another world to call their own. A remote space station was built where Cylon and human could meet and maintain diplomatic relations. Every year the Colonials send an officer. The Cylons send no one. No one has seen or heard from the Cylons in over forty years."

With these words so begins the Mini-Series. 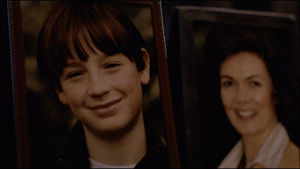 Photos of Boxey and perhaps his mother
Credit: Sci-Fi

Armistice Station was this remote space station, and was attended by an Armistice Officer, who happened to be Boxey's father.

A few items of interest are visible in Armistice Station:

Armistice Station was dwarfed in size by the Cylon basestar that paid it a visit. In a mysterious choice for the opening salvo of the Cylon attack, the basestar attacked and presumably destroyed Armistice Station, while on board a humano-Cylon made out with the Armistice Officer as two updated Cylon "chrome toasters" watched. The Armistice Station section of the Mini-Series page discusses this peculiar circumstance.