For information on a similarly-named (but differently spelled) alcoholic beverage in the Original Series, see Ambrosa. 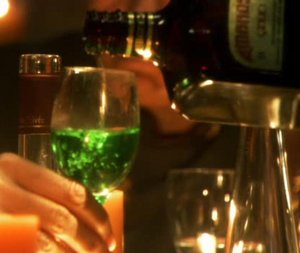 The ambrosia flows richly during the Tighs' reunion dinner.
(Tigh Me Up, Tigh Me Down)

Ambrosia is an intoxicating alcoholic beverage, typically green in color.

Ellen Tigh presents a bottle of ambrosia to her husband, Colonel Tigh, after they have reunited (Tigh Me Up, Tigh Me Down).

During a documentary on the military of the Fleet conducted by D'Anna Biers, an inebriated, cigarette-smoking Felix Gaeta reveals a tattoo and comments: "Ambrosia's good with a chaser. And if you have enough ambrosia-- didn't really hurt that much" (Final Cut).

According to the labels on the bottle; Ambrosia was produced in the Bliffe Sector by the Stanford Distillery for at least 100 years. It also appears to have been made with prison labor [1]. The telephone area code for the Bliffe Sector is (04).

Scorpion Marsh Genuine Ambrosia is a particularly expensive brand 58 years before the Fall of the Twelve Colonies. The majority of Capricans dislike Scorpion due to its potency and the belief that it smells like sulfur (CAP: "Know Thy Enemy"). Sister Clarice Willow presents a bottle to Amanda Graystone as a gift (CAP: "The Imperfections of Memory"). 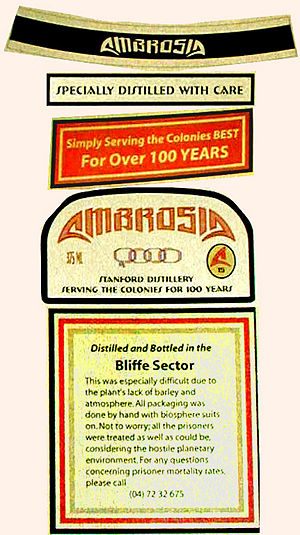 The actual labels from the bottle used on the show.