Difference between revisions of "Ambrosa"

For information on a similarly-named (but differently spelled) alcoholic beverage in the Re-imagined Series, see Ambrosia. 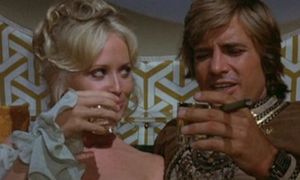 Ambrosa is an expensive alcoholic intoxicant, either golden or red in color (TOS: "The Long Patrol," "Murder on the Rising Star").

The rarity of the beverage makes it valuable amongst the survivors of the Twelve Colonies; even during the war, 500-yahren-old ambrosa was not believed to exist.[1]

Ambrosa is bottled in flute-style bottles[2] with plastic corks.

Starbuck imagines being rich after finding many storage bins filled with ambrosa on Proteus, a penal colony that made ambrosa for the Colonial war effort. Were it not for the Cylon attack on Proteus, he would have become quite wealthy (TOS: "The Long Patrol").