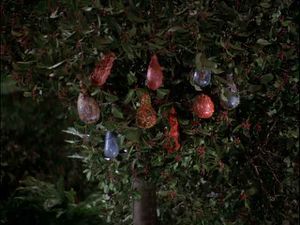 A bountiful crop aboard the Agro Ship (TOS: "War of the Gods, Part I").

Agro Ship is the common classification for spacecraft capable of growing any edible agro foodstuffs needed in a convoy or Fleet for long periods of time. These crafts have translucent hull plates interconnected in a structural enforcement grid, which allow the plants to receive the necessary sunlight from a nearby star or some other stellar formation to achieve the state of photosynthesis. Artificial lighting is, apparently, also an important function of these agro ships. One of the crops grown aboard the agro ships is the tallon plant.

Agro ships are unarmed, but can withstand an assault for some period of time.

Galactica's Fleet has three such agro ships; two of which are destroyed by the Cylons and the third, the Agro Ship 9, experiences a hull breach via a destroyed airlock (TOS: "The Magnificent Warriors").

Count Iblis also visits the Agro Ship 9 with Lieutenant Sheba during his time with the Fleet (TOS: "War of the Gods").

Agro ships were created by Aeries and are capable of converting "artificial sunlight into raw foodstuffs at an average efficiency of eighty-four percent". Converting the food to "add variety and taste appeal" reduces the overall efficiency of food, such as hydronic mushies to sixty-two percent. Agro ships are capable of recycling and reprocessing nutrients and water.

To create the artificial sunlight, the ship gets its energy from the "reburning of solium wastes from the main drive engines of [ships in] the fleet". In addition, agro ships are equipped with foodstuffs that have been created to process the "solium light spectrum" efficiently and grow in the weightlessness of space.[1]