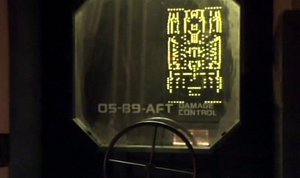 The door of Aft Damage Control.

The Aft Damage Control room presumably controls shipboard bulkheads, vents, and other life-sustaining aspects on Galactica. In the event of fire or other hazards, the room can be used to adjust controls that manage fires or prevent smoke and other toxins from permeating the remainder of the ship. It is likely that this room is used only if the command crew in CIC are dead or incapacitated, or unable to perform the D.C. task from CIC's Damage Control station.

It is unclear if 06-B9 AFT DAMAGE CONTROL is a computer, or if it just refers to the closet where manual controls for life-support are located.

Colonel Saul Tigh knew from experience that the use of such damage control rooms was a Cylon Centurion boarding tactic. By gaining control of these rooms, a Cylon could vent the atmosphere of a battlestar into space, suffocating the crew, or open bulkheads and airlocks to eject the crew into space. The Cylons would also attempt to control Auxiliary Fire Control to use the battlestar's own batteries against other Colonial ships--in this case, to fire on the civilian Fleet.