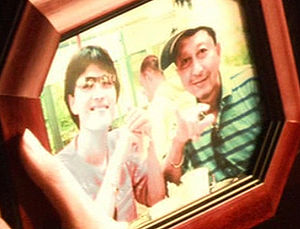 Abraham Valerii was claimed by Sharon Valerii as her father on the mining colony of Troy, apparently killed during a disaster on the colony (TRS: "Flesh and Bone"). He was married to Katherine Valerii (TRS: "Kobol's Last Gleaming, Part II"). Sharon was in fact a copy of Number Eight with no biological parents, so the Valeriis were either nonexistent or a couple unrelated to her.